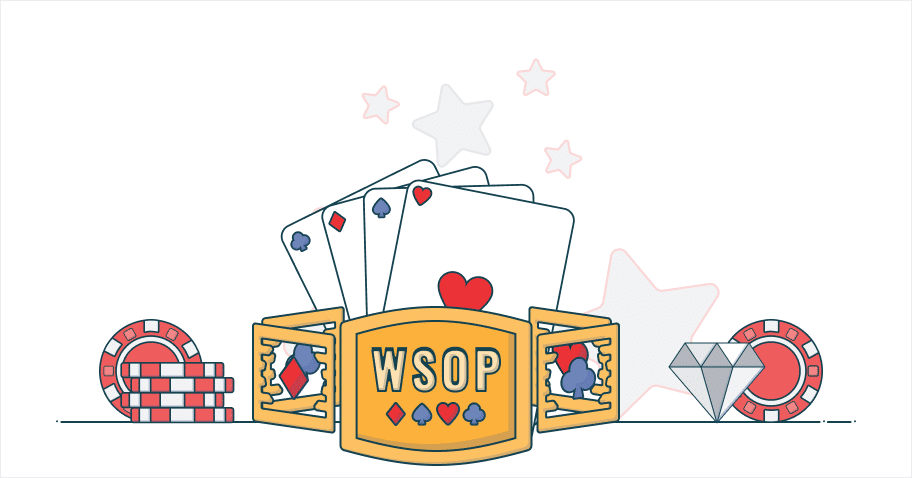 One of the live tournament poker calendar highlights is undoubtedly the World Series of Poker (WSOP). Thousands of players from around the globe descend on Las Vegas every year in the hope of bagging big cash prizes as well as a coveted WSOP bracelet. UScasino.com scrapped the internet to find out what Americans were most curious about the WSOP and collected some answers. Here’s all you need to know about the most prestigious tournament series and the most famous prize in poker.

What is the World Series of Poker?

The WSOP is the biggest and best-known poker tournament series in the world. The series includes events in a host of different poker formats, including limit and no-limit hold’em, omaha, razz, badugi, stud, and pretty much anything else you can imagine. The most famous tournament is the $10,000 Main Event. Founded in 1970, WSOP players have won $3.29 billion in prizes at World Series events. The 2021 event attracted almost 128,000 WSOP players chasing prize pools of just under $238 million and, of course, the prestige of owning a coveted World Series of Poker bracelet.

How do you get a WSOP bracelet?

Where and when does the World Series of Poker take place?

After 17 years at Rio Casino, WSOP organizers have announced that the 2022 World Series of Poker will be held at the Bally’s and Paris Las Vegas Hotel & Casino from May 31 through to July 19, 2022. The exact tournament schedule hasn’t been revealed yet, but if previous WSOPs are anything to go by, the lineup will include 80 to 90 different live tournaments. The 2021 WSOP offered players 173 various opportunities to land a WSOP bracelet. There were 88 WSOP live tournaments with another 85 up for grabs in the online portion of the series. WSOP organizers have also confirmed that actor, comedian, and card player Vince Vaughn will be the event’s official celebrity Master of Ceremonies in 2022.

How Much Does it Cost to play in the World Series of Poker?

There are buy-ins to suit all bankroll levels at the WSOP. The smallest buy-in at the 2021 WSOP was the Colossus Event which cost just $400 to enter. The event attracted a field of 9,399 runners who created a prize pool of over $3 million. Winner Anatolii Zyrin turned his $400 buy-in into an impressive first prize of $314,705.

The WSOP tournament with the biggest ever buy-in was the Big One for One Drop, which cost $1 million to enter. $111,111 of each entrant’s buy-in goes to the One Drop Foundation. Founded by Cirque du Soleil creator Guy Laliberte, it’s a charity that helps provide clean water around the globe.

Antonio ‘The Magician’ Esfandiari pocketed the biggest payday in tournament poker history in the 2012 One Drop, beating a field of 48 to land the $18,346,673 first prize.

It might not have the biggest prize pool anymore, but the showpiece World Series of Poker tournament is always the WSOP No-Limit Hold’em Main Event, which has a buy-in of $10,000. If that sounds a bit steep, there are opportunities to qualify much more cheaply via satellite tournaments.

What are WSOP Main Satellites?

Work your way through the pyramid of satellites and it’s possible to qualify for big money events for relative peanuts. Satellites have multiple buy-in levels, starting at just pennies. Many WSOP satellites don’t just include the buy-in for the tournament. They will also include money for travel expenses, including flights and accommodation at a Las Vegas hotel. Some will even throw in meals and some spending money too.

The most famous example of a player qualifying for the WSOP by a satellite is the wonderfully named Chris Moneymaker. He qualified for the 2003 WSOP Main Event via an $86 satellite. The unknown accountant from Tennessee went on to win the $10,000 buy-in tournament and pocketed the $2.5 million top prize.

Koray Aldemir won the 2021 World Series of Poker Main Event. The Berlin-born pro outlasted a field of 6,550 entrants to scoop the enormous first prize of $8 million. The German was also crowned the game’s unofficial ‘World Champion’. The top 1,000 finishers in the $10,000 WSOP Main Event all won a prize of at least $15,000. Only the winner gets the bracelet, though.

How much is a WSOP bracelet worth?

Each bracelet itself is said to be worth around $5,000. It’s the kudos from winning a WSOP event rather than the monetary value that make these prizes so coveted, though. The design of the bracelet changes each year.

The winner of the $10,000 Main Event usually wins a uniquely designed bracelet as well as bundles of cash. For example, the 2012 Main Event bracelet was made from 14 karat gold and encrusted with rubies for hearts and diamonds and black diamonds for spades and clubs. Nice.

Peter Eastgate, the 2008 WSOP Main Event winner, put his bracelet up for auction. The winning eBay bidder paid $147,500 for this piece of poker history. The money raised was donated to UNICEF.

Which WSOP player has won the most bracelets? Phil Hellmuth aka the ‘Poker Brat’ is currently out in front with the most wins at the WSOP. He added a 16th WSOP bracelet to his collection by taking down the $1,500 No-Limit 2-7 Lowball Draw event at the 2021 World Series with his poker moves. All-time greats Doyle Brunson, Johnny Chan, and Phil Ivey are next on the list with 10 bracelets apiece, followed by Erik Seidel and Johnny Moss on nine. The highest non-American on the list is Canada’s Daniel Negreanu, who has six bracelets.

Hellmuth might have won the most WSOP bracelets, but most judges would regard another Phil, Phil Ivey, as the game’s greatest player. The American plays in some of the biggest cash games in the world, both online and against the super high rollers in Macau and Las Vegas. He’s also an ace at the tournament tables, winning 10 WSOP bracelets to date.

Who has won the WSOP Main Event the Most Times?

The WSOP players to have won the $10,000 Main Event the most times are Stu Ungar and Johnny Moss, who won the tournament three times. Alongside Ungar and Moss, Doyle Brunson and Johnny Chan are the only other players to win back-to-back Main Events if you’ve seen the classic movie ‘Rounders,’ who’ll have seen one of Chan’s famous wins.

The biggest WSOP Main Event payout went to American Jamie Gold, who pocketed $12 million back in 2006. The youngest Las Vegas Main Event winner was Joe Cada, just short of his 22nd birthday in 2009. Even younger was Annette Obrestad, the first winner of the WSOP Europe Main Event. The Norwegian won the £1 million first prize aged 18 and wouldn’t even have been allowed to enter the Las Vegas Main Event for another three years!

WSOP – Still the Biggest and the Best

The World Series of Poker bracelet remains the most coveted prize in the game. The series is as popular as ever and attracts huge numbers to both its live and online tournaments.

The 2022 event looks like being one of the biggest World Series ever, giving WSOP players ample chances to try and get their shot at poker immortality.

If you have a poker bucket list trying to win a World Series of Poker bracelet should definitely be on it.