Home » NFL Memorabilia: Top 5 Teams With The Most Valuable Items (2022)

NFL Memorabilia: Top 5 Teams With The Most Valuable Items (2022) 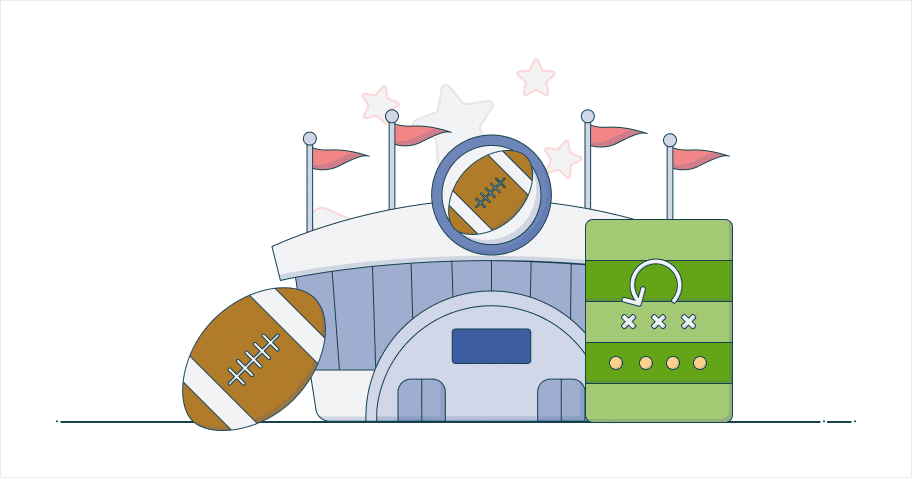 Who can forget iconic Super Bowl moments like David Tyree’s incredible ‘helmet catch’, John Elway’s ‘helicopter’, and Matthew Stafford’s recent game-winning touchdown pass to Cooper Kupp for the Rams against the Bengals? Great memories are made of these moments. For some fans though, memories alone aren’t enough. They want a tangible piece of the football action. That’s one of the main reasons why NFL signed memorabilia has become so popular.

Prices for autographed cards, helmets, and jerseys can range from the pennies right up to hundreds of thousands of dollars for the most exclusive pieces.

The research team at US online casinos review platform has crunched the numbers to find the most expensive NFL memorabilia for five of the NFL’s most popular teams. Those teams were determined by Facebook followers, using information from Statista.

Researchers then scraped a selection of NFL memorabilia sites to find out which teams have the most valuable collectors’ items.

With more Super Bowl wins than any other franchise, it’s no surprise that the New England Patriots also score highly when it comes to the price of NFL memorabilia.

With the possible exception of head coach Bill Belichick, no one was more important to the success of the all-conquering Patriots than quarterback Tom Brady.

The former sixth-round draft pick won six Super Bowls with the Patriots and was named the MVP in four of them. He’s also been named the NFL MVP three times and received Pro Bowl recognition no fewer than 15 times. Brady has thrown more touchdown passes than any other quarterback in NFL history and is also the all-time leader in passing yards.

The 44-year-old announced his retirement earlier this year but quickly made a u-turn. He’ll be back in a Bucs uniform for 2022, hoping to land an eighth Super Bowl Ring.

Brady’s success has transcended the football field into the wider world. He has 2.5 million followers on Twitter and 11.7 million on Instagram.

With all that success on and off the field, it’s no surprise that Brady features in the list of most expensive NFL memorabilia.

You can check out the signed card here. 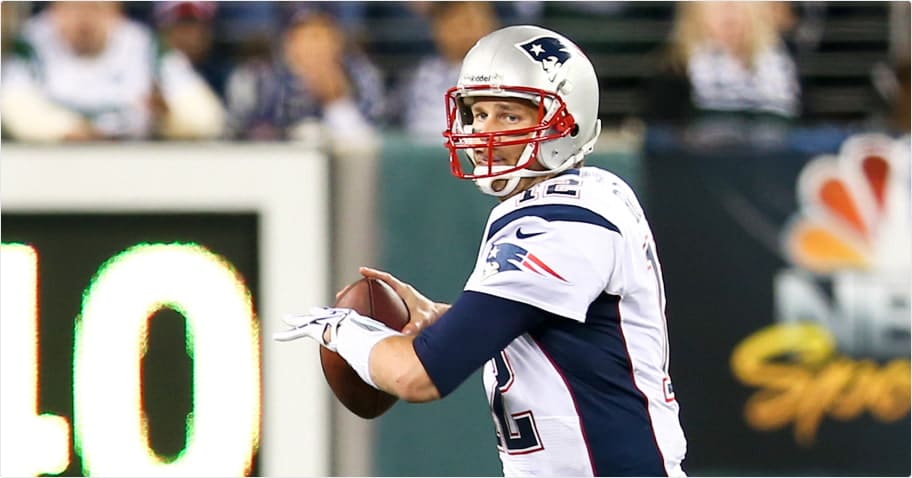 You could probably have guessed that Tom Brady would feature at the top of the most expensive NFL signed memorabilia list. You’d have got long odds on guessing who was second – Green Bay’s Jordan Love.

The Packers might be high on the list of most popular franchises (fourth overall) but we’d have expected memorabilia from Aaron Rodgers, Brett Favre, or Reggie White rather than the current backup quarterback.

It looks like Love will have to wait a while longer before taking the starting quarterback reins at Lambeau after Aaron Rodgers signed his recent megabucks contract extension.

The 23-year-old has started just one game despite being drafted 26th overall in the 2020 NFL Draft.

Love might be at the start of his NFL career but he’s already a heavyweight when it comes to NFL memorabilia. His 2020 National Treasures Rookie Patch is the second most valuable NFL-signed memorabilia on our list.

The Dallas Cowboys are known as ‘America’s Team’ for good reason. The pride of Texas has millions of fans around the globe and more Facebook followers than any other NFL team.

With such a huge following, it’s no surprise that the Cowboys’ NFL memorabilia is both popular and extremely valuable.

Selected by the Cowboys in the fourth round of the 2016 NFL Draft, Prescott replaced Tony Romo as the Dallas starting quarterback and has been a key factor in their offensive success ever since. The Mississippi State alum was named NFL Rookie of the Year in 2016 and has also been also voted to two Pro Bowls.

After injury-shortened his 2020 season, the 28-year-old enjoyed a career year in 2021, throwing a franchise-record 37 touchdown passes. The season would end in disappointment though as the Cowboys lost 17-23 to the 49ers in the Wild Card round of the playoffs.

Prescott has a strong presence on social media with 1.4m followers on Twitter and 2.2 million on Instagram.

The Dak Prescott 2016 Contenders Sepia Cracked Ice Autographed Rookie Trading Card is on offer from SportsMemorabilia.com at over $45,000.

The Bears are only in 10th position in the list of most popular NFL teams, but they still score very highly for expensive NFL memorabilia thanks to the late, great Walter Payton.

The legendary Chicago running back’s 1976 Trading Card is among the most valuable NFL-signed memorabilia currently available.

On his retirement in 1987, Payton was the holder of a host of NFL records including career rushing yards, touchdowns, yards from scrimmage, and many more. Extremely versatile, ‘Sweetness’ held the record for the most receptions by a running back. He even threw eight touchdown passes!

The fourth overall pick in the 1975 NFL Draft won the NFL’s MVP Award in 1977 and capped an amazing pro career as a member of the all-conquering Chicago Bears team that won Super Bowl XX.

Already a member of the College and Pro Football Halls of Fame, Payton was inducted into the National Federation of State High School Associations Hall of Fame as part of the class of 2022.

Payton died tragically young. He passed away on November 1, 1999, from cholangiocarcinoma, a form of bile duct cancer, aged just forty-five. The running back’s legacy lives on in the NFL and beyond to this day, though.

The Walter and Connie Payton Foundation is a charity whose aim is “is to take an active role in helping those less fortunate to find stability while providing positive opportunities needed to live their lives with dignity and pride.”

The NFL Man of the Year Award, which honors a player’s voluntary and community work as well as on-field performance, is also named after Payton.

Number 34 was a legendary figure on and off the football field. It’s no surprise that NFL memorabilia featuring Payton remains quite so popular.

Check out the 1976 football card at SportsMemorabilia.com. 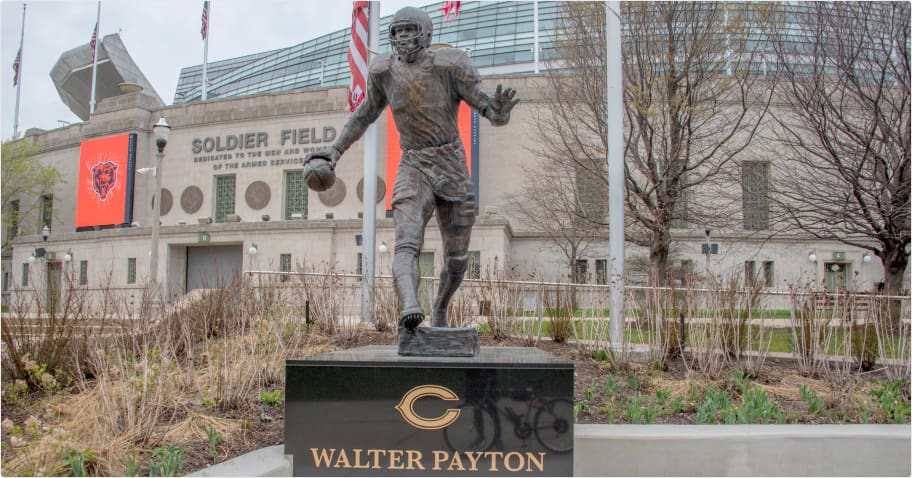 The New York Giants come in the ninth position on the social media popularity ratings. The Eli Manning signed helmet nudges into the top five when it comes to the most valuable memorabilia, though.

This isn’t just any old helmet either. It’s the one Manning wore in Super Bowl XLII where the Giants pulled off one of the biggest upsets in NFL history.

The Giants were 12-point underdogs going into the season finale against Tom Brady and the unbeaten New England Patriots.

The game is probably best known for David Tyree’s ‘Helmet Catch’. Trailing 14-10 with just 2:39 left in the fourth quarter, Manning tossed a hopeful throw down the middle of the field which Tyree grabbed with the help of his helmet. The improbable 37-yard completion was the key play on what proved to be the game-winning drive. Manning, who was named the Super Bowl XLII MVP, sealed the victory by completing a 13-yard touchdown pass to Plaxico Burress with just 35 seconds left on the clock.

The former number one overall pick added a second MVP Award to his collection by steering the Giants to another World Championship in 2012. Once again, the favored Patriots were on the end of some Manning magic who led the New Yorkers to a 21-17 triumph at Super Bowl XLVI.

Since his retirement, Manning has become a regular in the media, commentating on Monday Night Football alongside brother Peyton. Keep up to date on all things Eli via his Twitter account which has 438k followers.

The global market for sports collectibles is worth a massive $4.14 billion according to Market Decipher. That market is expected to grow at a rate of 9.17% between 2022 and 2031.

The global pandemic affected many sectors of the economy, but sports memorabilia was largely untouched. Digital purchases grew by up to $200 million in 2020 with sales on eBay rocketing by 142% between 2019 and 2020.

Trading cards are the mainstay of the NFL memorabilia market. If you have any old Panini and Topps cards gathering dust in the attic it could be worth digging them out. Find the right card from the right year and you could be sitting on thousands of dollars.