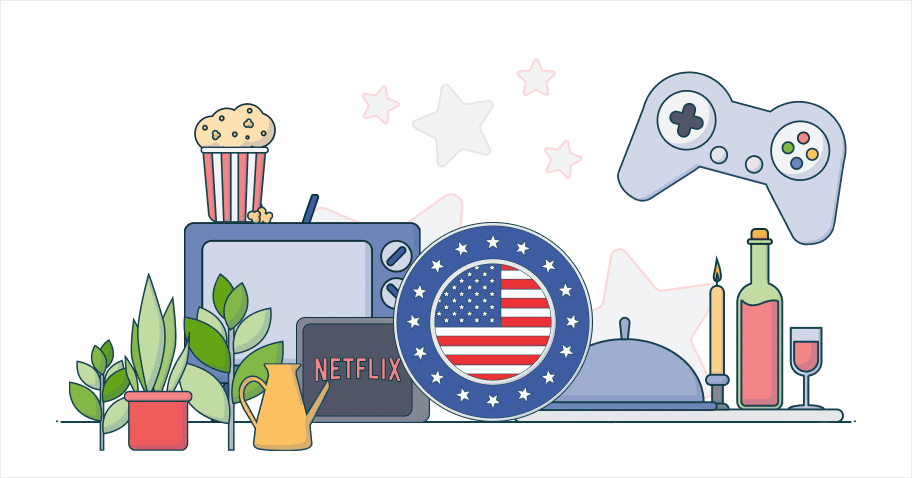 What does the American public enjoy doing with their leisure time? Do they prefer energetic outdoor stuff, or would they rather watch some classic TV? How about catching a movie or perhaps eating out? What about gardening, gambling, or gaming? Just what are the classic American hobbies? Researchers at USCasinos.com have crunched the numbers to try and find out. Drilling into the data, they’ve looked at pastimes particularly popular with American males and females. They’ve also considered whether the younger generation enjoys the same activities as their elders. Read on to find out more about America’s favorite pastimes.

Watching TV is the easiest leisure activity to enjoy, requiring no effort and being available at home, and it remains a huge America’s favorite pastime. 76% of respondents said they enjoyed watching TV compared to just 6% who have a negative opinion. The popularity of TV viewing is high among all age groups, with the Millennial and Baby Boomer popularity figures coming in at 74% and 76%. Gen Xers are the most avid TV viewers, with 80% of them saying they enjoyed it.

Unsurprisingly watching TV proved a more popular pastime than attending sporting events in person. According to the survey, 39% of people liked doing that in 2021. That was the second-lowest figure of the 16 leisure pastimes assessed, behind only gambling. Millennials had the most positive outlook on attending live sporting events, with 44% saying they liked it compared to 39% and 36% for Gen Xers and Boomers, respectively. Males in the survey had a slightly more positive response to watching sport (40%) than females (38%).

Sports fans may be more vocal in their support, but they’re not as widespread as television viewers.

Eating Out at Restaurants vs. Going to the Movies

Dining out and going to the movies are still classic American pastimes for people of all ages and sexes. Dining out is the more popular of the two hobbies, with 73% of people saying they enjoy it compared to 58% who like going to the movie theater. Eating out was especially popular with millennials in 2021, with 77% saying they enjoyed dining out. This compared with 73% for Boomers and 68% for Gen Xers. The Gen Xers were the most positive when going out to the movies, though, with 63% liking a night out at the pictures. That was significantly higher than the Boomers, who gave movies a 52% liking rating.

Americans prefer eating out at restaurants.

Gambling and playing video games are definitely more niche American pastimes. In fact, the hobby with the lowest popularity ranking in the survey was gambling, which only 32% of respondents liked. There are also definite age and gender splits when it comes to the popularity of gambling and playing video games. 69% of millennial respondents said they liked playing video games compared to just 28% from the baby boomer generation. Gen Xers were bang in the middle at 48%. The splits in the popularity of gambling were more pronounced between genders rather than ages. According to the survey, 39% of men said they enjoyed it a bit compared to just 26% of women. For those who enjoy gambling, explore our offers for US online casinos (always gamble responsibly).

Spending Time with Friends vs. Dating

Spending time with friends is extremely popular among all age groups and sexes. 80% of respondents said they enjoyed hanging out with friends compared to just 3% who disliked it (the rest were neutral). Those figures were consistent with Boomers, Gen Xers, and Millennials, and among males and females. Given the restrictions of the pandemic, it’s no wonder people have enjoyed being able to spend precious time with their friends.

Unsurprisingly, dating was rated a far less popular leisure pursuit, with just 40% of people saying they enjoyed it. Males found dating more enjoyable, with 45% saying they liked it compared to just 34% of women. Millennials, at 46%, gave dating the highest score, followed by Gen Xers on 42% and Boomers on 35%. Dating is presumably much less common among the older generation than youngsters.

Watching Movies vs. Listening to Music

Not everyone seemingly enjoys going out to theaters, but people of all ages enjoy watching movies. With Netflix, Amazon Prime, Disney+, and Hulu, thousands of movies are available at the click of a button from the comfort of your own home. You don’t have to worry about rustling candy wrappers or chattering neighbors. According to the survey, 80% of respondents enjoyed watching movies. This leisure activity was extremely popular with men and women and all age groups.

The same is true of listening to music, a hugely popular pastime with men and women of all ages. Listening to music topped the YouGov poll of the most popular leisure activities, with 85% of people enjoying it and just 3% who didn’t. That high number was consistent among all age groups, from millennials to boomers. According to the survey, just 3% of people dislike listening to music.

Both watching movies and listening to music rate is high among America’s favorite pastimes.

Buying and Selling Online vs. Gardening

There’s a real age divide between buying and selling online and gardening. The latter is far more popular with older people than youngsters. 72% of boomers had a gardener’s green thumb compared to 67% of Gen Xers and 61% of millennials. The opposite was true of online shopping and selling. This more tech-friendly hobby was much more popular with the millennials and their older counterparts. 51% of millennials said they liked this leisure activity compared to just 36% of boomers. Both buying and selling online and gardening were slightly more popular pastimes with women than with men.

There are also big age and gender splits in shopping and traveling. 58% of respondents enjoyed shopping overall. That number was much higher with millennials (68%) compared to Gen Xers (55%) and boomers (50%). Shopping proved more popular with women than men, with 67% enjoying it compared to just 49%. Traveling was consistently popular across all ages and sexes. 74% of boomers and Gen Xers enjoyed traveling, which is higher than the 72% of millennials. That popularity was evident with women and men too, with 73% and 71% of females and males surveyed liking to travel.

The Covid pandemic has obviously impacted the popularity of certain hobbies and pastimes in the USA. Outdoor activities like gardening have become popular. As has entertainment you can enjoy in the comfort of your own home. Music and movies are enduring favorites. Watching movies at home on a streaming platform like Netflix has grown at the expense of going to an actual movie theater. Somewhat reassuringly, given all the competing attractions, spending time with family and friends is still among America’s favorite pastimes.

Our researchers looked at data collected by pollsters YouGov relating to 16 of America’s favorite pastimes in 2021. They looked at the popularity of each activity, assessing what percentage liked, disliked, or was neutral about that activity. The study then compared the popularity of activity within three different age groups – Millennials, Gen X and Baby Boomers. Researchers also examined how popular specific activities were among male and female respondents. Here’s what they found.