Jacks or Better is known as the simplest and most popular video poker variant. To win, you need a hand of at least a pair of jacks or better.

In our complete guide to Jacks or Better, find out how to play the game and what are the best strategies to use.


How to Play Jacks or Better

The game is based on 5-card draw poker and is played using a standard 52-card deck.

Your goal is to create the best possible poker hand. The minimum required hand to get a payout is a pair of jacks.

Here’s a ranking of all possible winning hands in Jacks or Better, starting from lowest to highest in value:

Taking the Jacks or Better video poker available at Golden Nugget online casino, the RTP is 98.45%. This assumes you are playing at the 5-coin level.

This RTP compares favorably to all slots and most table games. Keep in mind, the RTP can vary by game variant.

Here are the payouts you can expect for each hand:

Jacks or Better is a simple game, but you can boost your chances by using correct strategy.

That means knowing what to hold or discard, depending on what combination of cards has been dealt.

Here are some basic Jacks or Better strategy tips to keep you on the right track:

They can sometimes be worth holding though. It might not be immediately obvious, but the math says it’s the right thing to do.

When to Keep Low Pairs

When to Break Up Low Pairs

Keeping low pairs instead of chasing draws is usually the correct play. There are a couple of exceptions though.

As a pair of Jacks or better is a winning hand with the potential to improve, it’s usually worth keeping them. There are exceptions though.

When to Keep High Pairs

When to Break up High Pairs

There’s only one good reason to break up a high pair. That’s when you’re just one card away from landing a Royal Flush.

To sum it up, always keep high pairs unless you’re one card away from a Royal Flush.

Pros & Cons of Jacks or Better

Jacks or Better is an action-packed Video Poker variant with a super high RTP compared to slots and some table games.

It’s easier to make winning hands compared to most video poker formats, because of the one-pair requirement of jacks or better.

This game has low volatility, meaning you should expect frequent wins. Though, the big wins might come less frequently compared to some high volatility variants.

Different popular formats, such as Double Bonus or Aces and Faces, have a higher maximum payout. Whereas Joker Poker makes forming winning combinations easier through its Wild card. 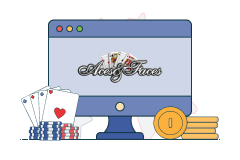 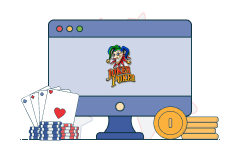 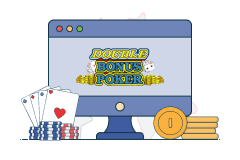 Payouts can reach up to 100.17% RTP
Unlock bonuses by getting a 4 of a kind combo
No wild cards
Double Bonus Poker

Jacks of Better is simple to play but offers an element of strategy so you can improve your winning chances. The RTP stacks up favorably too, especially compared to games like roulette and slots.

If you’ve not played video poker before but fancy giving it a go, Jacks or Better is an ideal format to begin with.

Can you play Jacks or Better Video Poker for free?

Most online casinos offer a Jacks or Better free play game. This allows you to brush up on your strategy without having to risk any of your cash. You can play Jacks or Better in demo mode, without any limits.

What is the most you can win at Jacks or Better Video Poker?

A royal flush is the best hand in Jacks or Better out of all possible hands. At most casinos, this will get you a prize of 250 coins at lower coin bets. Play at the maximum 5-coin level and that prize increases to 800 coins.

Is Jacks or Better the best form of video poker?

It’s easy to play. It has a high RTP. It offers players the chance to use strategy. That combination has proven to be incredibly popular. Jacks or Better is the classic form of video poker, and it’s considered the best by many players because of the above-listed reasons.

What is the Jacks or Better Video Poker RTP?