Go digging for gold in Twice The Money, a simple mining-themed slot from Ainsworth. Played using a 5 reel, 30 payline game engine, this medium volatility slot comes with a free spin bonus where multipliers can rise to up to 8x throughout the round.

Find out more in our detailed Twice the Money review. 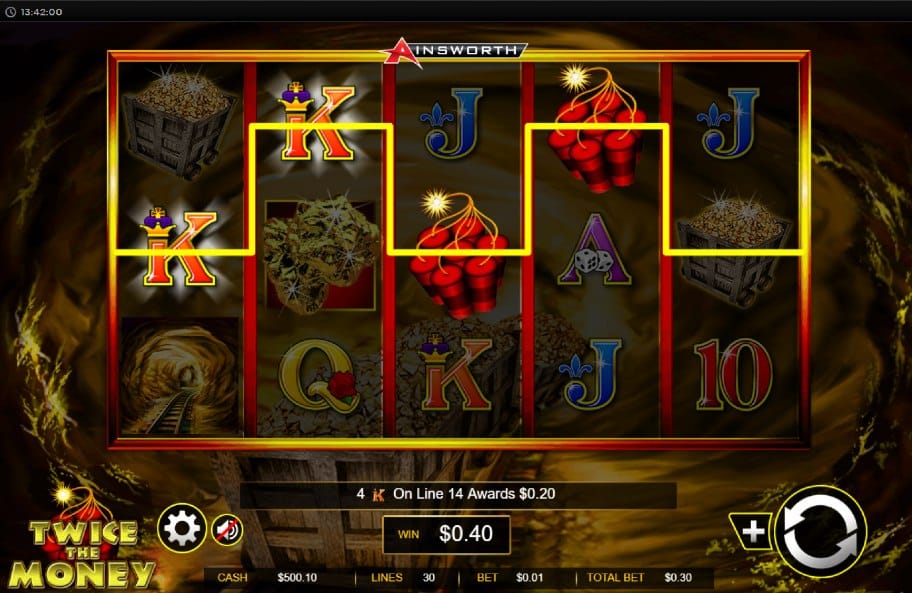 The action in Twice The Money takes place on a 5 reel, 3 row, 30 payline machine. Create winning combinations by landing 3, 4 or 5 matching symbols or wilds from left to right in a payline, starting from the leftmost reel.

You can play the game at bet levels that start at $0.30 per spin. To adjust your stake, head to the settings then move the slider to a level you’re comfortable with.

Paytable amounts are shown in cash relative to your current bet level. It’s worth noting here that a different paytable is used during the free spins round. The payout amounts are generally lower than those offered in the base game for the same combination. Balancing that are the potential multipliers of 2x, 4x and 8x.

The Twice The Money RTP is 94.30% which is below average. The volatility is in the medium range with payouts capped at a maximum of $130,000. 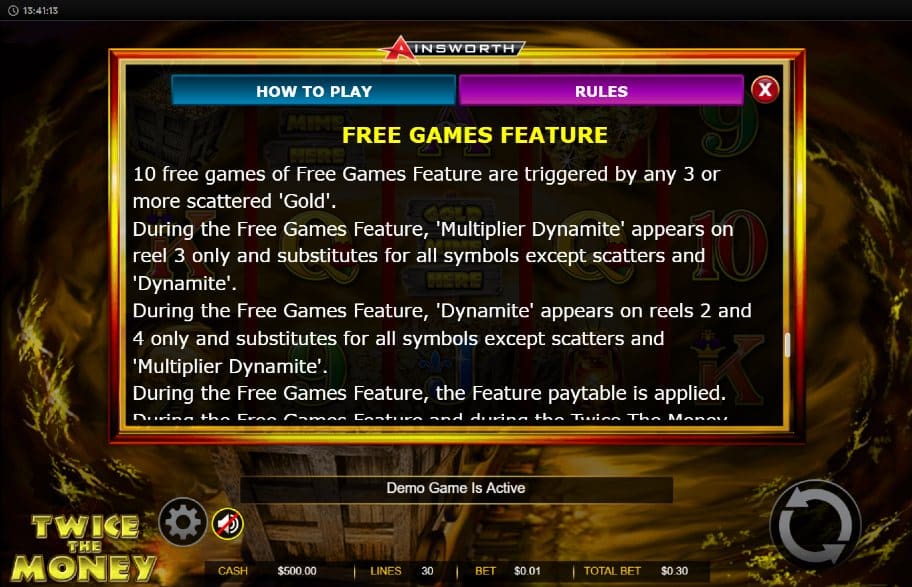 Detonating an explosion of coins is the name of the game in Twice The Money and the best opportunities to do just that come via the free spins feature where multipliers can get things rumbling along.

Trigger the bonus round in the usual manner by landing 3, 4 or 5 golden nugget scatters on the same spin. You’ll receive a payout equal to 2, 10 or 100x bet. You’ll then go on to play 10 free spins.

This extra becomes active if you land 3, 4 or 5 gold nugget scatters during the free spins. Another round of 5 free games is added to your total. The dynamite multipliers are active during the Twice the Money spins and can really get the action motoring. The only downside is that it’s not possible to re-trigger the Twice The Money feature.

Twice The Money Paytable and Paylines

Design, Theme and Visuals of Twice The Money

Like most slots in the Ainsworth catalogue, the design in Twice The Money is simply done. The setting is a gold mine. On the reels are lower value royals which appear alongside symbols that fit the mining theme.

You’ll see miner’s lamp, an underground railroad, a cart full of coins, a Gold Mine Here sign and a set of scales.

The dynamite symbol is the wild. In the base game it can land on reels 3, 4 and 5 only. It doesn’t offer any specific pays but it does replace everything bar the golden nugget scatter.

There’s not much in the way of a soundtrack. Twice The Money has the feel of a rather old school brick and mortar-style casino slot.

Twice The Money Advantages and Disadvantages

Go prospecting for riches in American Gold Rush. This 5 reel, 30 payline slot from Spin Games comes with wild reels, a pick me feature and a free spin round where all payouts are doubled.

Detonating a big jackpot is also the goal in Bonanza Megaways. One of the earliest Megaways releases, it comes with up to 117,649 ways to win and free spins with expanding multipliers.

If you like high variance action to go with the frontier theme, consider The Wild 3. It’s a 5 reel, 10 payline slot from NextGen Gaming that comes with re-spins, free spins, wild extras, multipliers and a pick me feature. 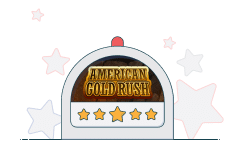 Is there a Twice The Money free spins bonus?

Once triggered, you’ll receive a payout of 2, 10 or 100x bet before going on to play 10 free spins. These come with wild multipliers which expand throughout the round to boost payouts by 2x, 4x or 8x.

What is the Twice The Money feature?

This is a rather fancy way of describing a re-trigger. Another 5 free spins are added to your tally and the dynamite multiplier will be active to enhance your winning opportunities.

What is the Twice The Money RTP?

The Twice The Money return to player rate is 94.30% which is a little below average. The volatility is in the medium range. The maximum win comes in at $130,000.

Is there a Twice The Money mobile slot?

Yes, you can go digging whether you’re playing on a desktop, tablet or cellphone device. There’s also a Twice The Money free play slot, so you can try the game out in demo mode.