Big Time Gaming blasts off into space in the intergalactic-themed action in Starquest Megaways. It’s a 6 reel video slot where the number of ways to win can get as high as 117,649.

The range of extras here isn’t massive but the Full Reel Wilds trigger re-spins with expanding whenever they land and can deliver some potentially exciting action.

Find out more in our in-depth Starquest Megaways review.

The setup in this space adventure is rather simple for a Megaways slot. There aren’t any reaction wins or cascading reels here for starters. The action plays out on a 6-reel machine. The number of symbols that appear on each reel varies from between 2 and 7 on each spin. This impacts on the number of ways to win. If all 6 reels contain the full complement of 7 symbols, you’ll have 117,649 Megaways in play.

Winners are formed by landing 3 or more matching symbols or wilds on adjacent reels. The win both ways mechanic means that winners can start from reel 6 as well as reel 1.

Many slots that use the Megaway mechanic come with a wide variety of extras. Starquest Megaways is a much more stripped back slot as far as gameplay is concerned. The only extra comes courtesy of the Full Reel Wilds.

Appearing on reels 2 through 5, the female astronaut is the game’s wild symbol. She substitutes for all the standard symbols when she forms part of a winning combination. These wilds also come with a starting multiplier of between 1x but there are opportunities to increase this value.

As its name suggests, the wild fills the whole of its reel whenever it lands. That’s not all it does either. Each time a Full Reel Wild lands, the astronaut does a quick pirouette and fires a shot with her laser to trigger a re-spin. The Full Reel Wild multiplier increases to 2x, locks in position and the other reels spin again.

Land another Full Reel Wild on a re-spin and it also locks in place. The value of all the wild multipliers also increases by 1x. The maximum a multiplier can reach is 5x.

The ideal situation is to land a re-spin with Full Reel Wilds on all of reels 2, 3, 4 and 5. With the multipliers combining, you could see a massive 120x multiplier in play with wilds with the top multipliers active on the 4 middle reels.

BTG’s usual unfussy design is in play in Starquest Megaways. The reels are set against a backdrop of a shimmering planet and a galaxy of stars. BTG’s standard colored A to 9 royal symbols are joined by higher value green, blue and red symbols. The most rewarding standard symbol is the SQ logo. A 6-symbol combination awards 15x. Not huge for a top prize but the wild multipliers can send the usually lowly figures rocketing.

As we’ve already discussed, the astronaut is the wild. There’s a bit of Manga about this symbol which is nicely drawn.

If you like the space theme and the simple hypnotic gameplay on offer in Starquest Megaways, check out Starburst. This classic from NetEnt has become a huge fan favorite thanks to its slick design and re-spins with stacked wilds.

NetEnt are also the brains behind Starburst XXXtreme. This sequel offers a similar design to the original but comes with a wider variety of features and potentially much bigger jackpots.

If you like the more straightforward Megaways slots, you won’t go too far wrong with Bonanza. This mining-theme slot helped spark the Megaways boom and comes with reaction wins and a free spin bonus with expanding multipliers. 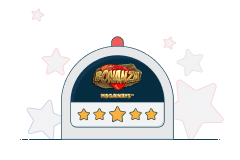 Max wins of up to 200,000x
More features then original
Very volatile

What are Full Reel Wilds?

The astronaut wild fills the whole of the reels whenever she lands. She comes with a starting multiplier of 1x but this can rise. Landing more than one wild in a winner sees the values of the multipliers combined to give an even bigger payout boost.

What are Wild Re-spins?

Land a Full Reel Wild and it locks in place and a re-spin is awarded. The value of the multiplier increases, up to a maximum of 6x. The perfect storm is to land a re-spin where you have stacked wilds on reels 2, 3, 4 and 5.

What is the Starquest Megaways RTP?

The Starquest Megaways return to player rate is 96.22% which is slightly better than average. The volatility is on the high side of medium. The most you can potentially win from a single spin is 12,600x bet.

Is there a Starquest Megaways free play slot?