Starburst is an iconic slot game, produced by the giant NetEnt. The main attraction are the Starburst Wilds which lead to re-spins with sticky expanding wilds. Turn all 3 middle reels wild and you could create a real supernova of action.

First released way back in 2012, this sci-fi favorite has gone on to claim classic status. Has it stood the test of time? Find out in our deep-dive Starburst review.

Here are the top 3 casinos where you can play Starburst online slot: 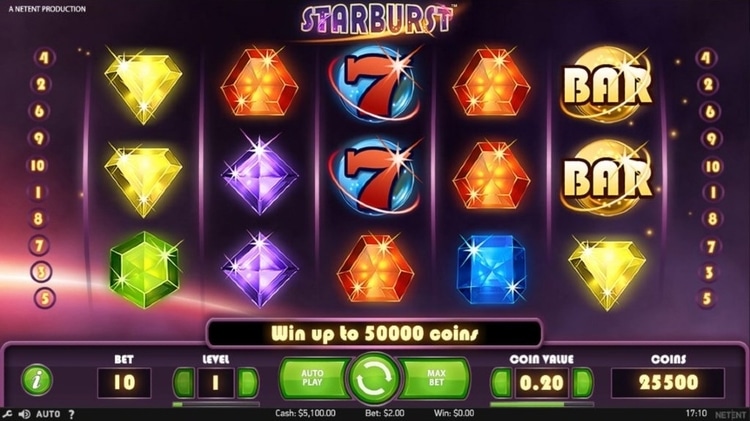 The setup in the Starburst slot is very straightforward. The action takes place on 5 reels, 3 rows and 10 fixed paylines. This game is slightly unusual in that it is a win both ways slot.

In most slots, winning combinations are formed by landing 3, 4 or 5 matching symbols wilds from left to right across a payline starting from the leftmost reel. That’s the case with Starburst too. As this is a win both ways slot though, you can also start winning combinations from the rightmost reel as well as the left.

You can blast off into space here at bet levels that range from 0.10 cents to $200 per spin. You can change your wager by clicking on the Level buttons and Coin Value buttons below the reels. Click on the i button below the reels to open the paytable. Payout amounts are displayed in coins. Just divide by 10 to get the payout amounts in currency format.

If you click on the Spanner icon in the bottom left-hand corner of the screen, you will see there is a Quick Spin mode. This allows for faster spin speed. There is also an Autoplay function which allows up to 1,000 autospins. There’s an Advanced Setting section where autoplay can be stopped on any win, if a single win exceeds a chosen amount or if your cash increases or decreases by an amount of your choice.

The Starburst RTP is 96.09%. That means on the long-term average, for every $100 wagered on Starburst $96.09 is paid out in prize. That return to player is about average for an online slot. There can be massive swings over the short term though. It’s all down to luck.

This isn’t a high variance slot. In fact, the volatility is low. That means you can expect plenty of smaller wins. The hit frequency rate is 22.65% so on average, you land a winning combination just less than a quarter of the time. The maximum win is 500 x your total bet from a single spin or re-spin. 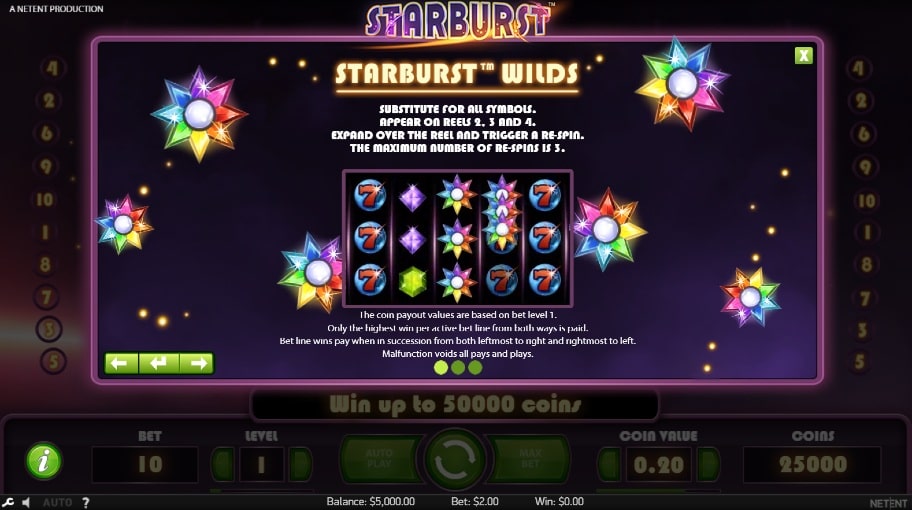 You’ll find plenty of online casino slots that come with a wider variety of bonus features than Starburst. It may be simple, but few games can match the hypnotic gameplay that Starburst offers. With 1 bonus feature, that’s chiefly down to the re-spins with expanding sticky wilds.

If you land another wild on the re-spin, the process is repeated. This wild also expands to fill the whole of its reel. Another re-spin is then awarded, this time with 2 sticky expanded Starburst Wilds.

The perfect combination is to land a third wild. This also expands to fill the whole of the reel. You’ll the go on to play a third re-spin with the whole of the middle 3 reels totally wild. This can deliver some potentially cracking combinations. That’s it as far as features are concerned. We told you it was simple!

Design, Theme and Visuals of Starburst 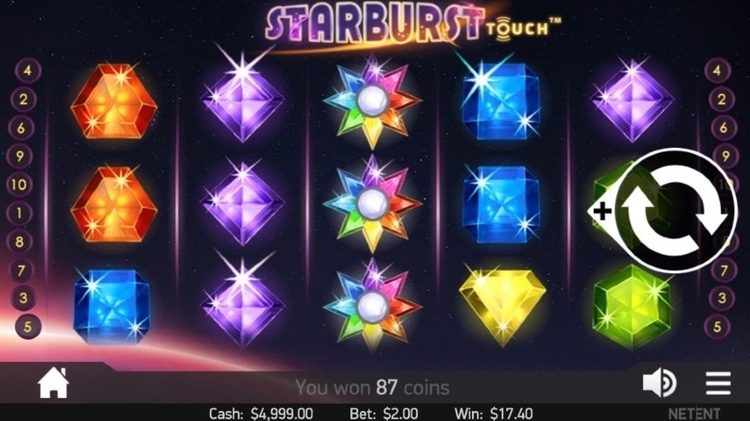 As we write this review, the Starburst slot is approaching its 11th anniversary. You might expect a game released more than a decade ago to be showing its age. That’s really not the case though. The design here is terrific, even to 2022 eyes.

With an outer space theme, the design has a futuristic feel. Set against a purple-tinged backdrop, the flashy visuals are matched by an electro-inspired soundtrack. It all comes together very nicely.

The reels are made up of purple, blue, orange, green and yellow gemstones as well as a lucky red 7. The most lucrative symbol is the BAR sphere. Land 3, 4 or 5 of these across a payline for a payout of 5, 20 or 25 x your bet.

Fill all the positions on the reels with BARs to scoop the maximum payout of 500 x bet. That’s worked out by multiplying 10 paylines by the 25 x bet payout which gives 250 x bet. Remember, this is a win both ways slot so that amount is doubled to 500 x bet.

You will also notice a Starburst Wild symbol that substitutes for all symbols. It also triggers the game’s only bonus feature which is described in more detail below.

Starburst’s simple formula has proven to be incredibly popular. If you want a bit more variety, check out the sequel, Starburst XXXtreme. This follow-up comes with multipliers that reach a massive 450x.

There’s more interstellar action on offer in Starquest Megaways from Big Time Gaming. It’s a simple Megaways slot that comes with Full Reel Wilds that trigger re-spins with expanding wilds whenever they land.

Hypernova Megaways is another space-themed slot worth investigating. Created by ReelPlay, it comes with a classic streak re-spin feature where collecting scatters delivers cash prizes and jackpots that can pay up to 2,000x bet.

Alternatives to the Starburst slot

Re-spins galore
Up to 2,000x worth of jackpots
Very simple gameplay

What is the Starburst RTP?

The Starburst RTP rate is 96.09% which is above average. The volatility here is low meaning a slot that pays more often, albeit on the smaller side.

What is the Starburst max win?

The maximum win per spin or re-spin is 500 x your total bet. This can be won if you fill the reels with high value BAR symbols as well as Starburst Wilds. Your chances increase in the only bonus feature.

How does the Starburst Wilds feature work?

The Starburst Wilds feature is triggered when a Starburst Wild symbol lands on any of the 3 middle reels. You’ll then receive a re-spin with a fully wild. It’s possible to land up to 3 re-spins, complete with 3 expanded Starburst Wilds.

Is there a Starburst free demo?

Yes, take the Starburst free play slot for a spin here at USCasinos.com. You can play this futuristic classic on all devices including desktop computers, tablets and cell phones. The straightforward gameplay make this game a very easy one to play.