Dive deep beneath the waves and go hunting for underwater treasure in Secrets of Atlantis. Based on the mythical city at the bottom of the sea, it’s a simple 5 reel, 40 payline video slot.

The main features here are nudging mermaid wilds and re-spins with colossal symbols that fill the whole of the middle 3 reels.

Will you want to get your feet wet here? Find out in our in-depth Secrets of Atlantis review.

The setup in Secrets of Atlantis is fairly straightforward. The action plays out on a 5 reel, 4 row, 40 payline machine. Winning combinations are created in the usual way for a paylines slot by landing 3, 4 or 5 matching symbols or wilds from left to right in a payline, starting from the leftmost reel. This a win both ways slot, though, so you can also start a winning combination from reel 5.

Bet levels here start at $0.10 but can get as high as $200 per spin for the high-rolling whales of the world.

The Secrets of Atlantis return to player rate is 97.07% which is above average. These waters aren’t massively choppy for your bankroll but there’s enough churn here to keep you on your toes. The Secrets of Atlantis volatility sits in the medium range. The most you can win from a single spin here is 3,200x your bet. 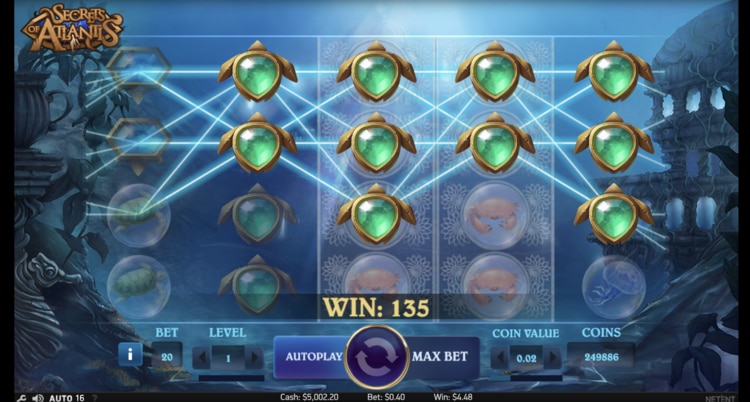 If you like games that offer the simple gameplay often found in live casino slots, you’ve come to the right place here. Secrets of Atlantis is not overloaded with features. There are a couple of extras here that can get these waters to bubble away nicely.

On each spin, any of reels 2, 3, and 4 can be highlighted in a mysterious glow. What you’re hoping to see is all 3 middle reels highlighted. When this happens, it triggers the Colossal Symbol Re-spin Feature.

The highlights are active on the re-spin too. If the reel with the colossal symbol is highlighted, you’ll receive another re-spin.

Land matching symbols alongside the colossal symbol and the action starts to motor.

The mermaid is the game’s wild symbol. As usual, this substitutes for all the standard symbols when it makes up part of a winning combination.

The wilds here also have additional properties. If only part of a mermaid wild lands on a reel, it nudges up or down until the whole of that reel turns wild.

The mermaid wild can appear as a colossal symbol during the re-spins feature. If a wild partially fills the colossal reel, it nudges up or down until all of it becomes wild. This can create some spectacular combinations.

Secrets of Atlantis Paytable and Paylines

Design, Theme and Visuals of Secrets of Atlantis 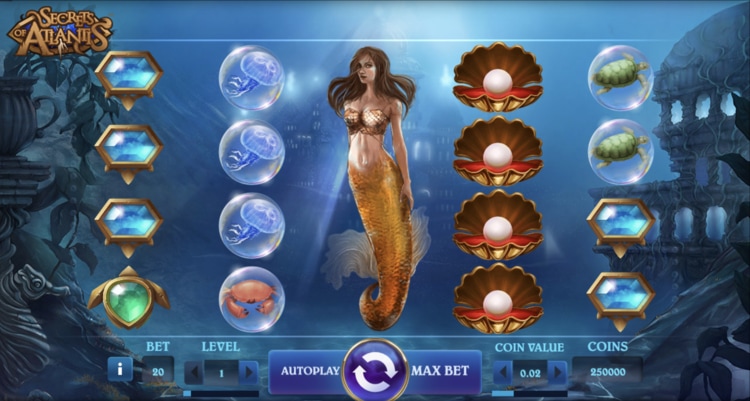 As you’ll usually find when you enter a NetEnt-powered slot, Secrets of Atlantis is very stylishly designed.

The reels are set against the ruins of an abandoned underwater city and include a selection of turtle, crab, jellyfish, and pearl symbols enclosed in bubbles. Rather than playing cards, the lower-value symbols are all gemstones.

Accompanying the action is soaring orchestral audio, which really adds to the game’s atmosphere. It’s all rather elegant.

Secrets of Atlantis Advantages and Disadvantages

There are plenty of slots that take players to the lost underwater city. Among the best of the modern releases is Atlantis Megaways from ReelPlay which comes with a stylish design, cascading reels, and a Jackpots Re-spins feature where you could scoop an instant prize of up to 2,000x bet.

Maintaining the underwater theme is Yggdrasil Gaming’s Atlantean GigaRise. This is played using an innovative Rising Reels mechanic and also comes with pick me prizes, free spins and progressive jackpots.

More mind-boggling progressive prizes are up for grabs in Atlantean Treasures Mega Moolah. Part of Microgaming’s jackpot slots network, it’s a 5 reel, 20 payline, win both ways slot that comes with expanding wilds and re-spins. The main attraction are of course, the progressive jackpots which are seeded at $1 million.

Alternatives to Secrets of Atlantis slot

Is there a Secrets of Atlantis free spins round?

There’s isn’t a standard free spin round here. Instead, re-spins with colossal symbols are the main feature offering. Also look out for nudging wilds that can fill reels or even the colossal symbol.

What is the Secrets of Atlantis RTP?

The Secrets of Atlantis return to player rate is a better than average 97.07%. The volatility is in the medium range. You can win up to 1,600x bet from a single spin.

Can you play Secrets of Atlantis on a mobile phone?

Yes, Secrets of Atlantis is available to play on all devices including desktop and laptop computers, tablets and smartphones.

What is a win both ways slot?