Based on the classic argument-inducing board game, Monopoly Electric Ways is an unusual 6 reel, 729 ways to win video slot from SG Digital.

There’s also a free spin bonus where houses and hotels can add to your winning chances.

Monopoly Extra Wins is played using a 6 reel, 729 ways to win machine. To create a winning combination, land 3 or more matching symbols or wilds on adjacent reels, starting from the leftmost reel.

You can play at bet levels of between $0.20 and $75 per spin. Its name might be electric but you wouldn’t say that about the volatility here which is on the low side of medium. The Monopoly Electric Wins RTP is an above average 96.51%. The maximum win in the base game is 100x bet which rises to a top prize of 1,500x bet during the free spins.

Like the other slots in the Monopoly franchise, there’s plenty of variety in Monopoly Electric Wins. The Monopoly board that surrounds the reels can deliver a selection of modifiers. The main feature is free spin bonus.

The main set of reels is situated in the middle of the screen. Surrounding the reels is a version of the classic Monopoly board. On each spin, 2 dice will roll, sending your counter to a new position on the board.

Land on a vacant property and you’ll become its owner. Own all the properties of the same color and you develop them by adding houses and hotels. These deliver special extras when you trigger the free spins.

When the counter hits other positions, you’ll trigger the Board Features.

Neon wild symbol can only appear on reels 1 through 5. These substitutes for all the standard symbols. If an Electric Bulb scatter lands in reel 5 on the same spin, the wild becomes a 2x multiplier wild. If there are multiple wilds on view, their values are added together to give an even bigger payout boost.

The free spins trigger when you’ve built a hotel on all the properties of the same color. The number of spins you’ll play is decided by the roll of the dice. You can get up to 16 free spins here.

It’s here that the houses and hotels you’ve built can come into play. Land on a square that’s been built on and you’ll win special bonus prizes. Like the board game, the dark blue squares have the best winning potential.

When you’ve used all your spins, all the houses and hotels are removed from the property squares and you’ll start the whole process from scratch.

The classic Monopoly board and imagery have been given a neon makeover here. Very impressive it is too.

There’s also a wild that can land on reels 1 through 5 and a scatter.

The neon symbols stand out nicely against the deep blue backdrop whether you’re playing on a desktop or the Monopoly Electric Wins mobile slot.

The soundtrack bounces along. It’s not particularly memorable but it’s not massively intrusive either. 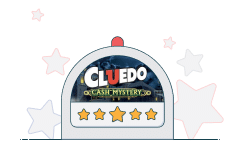 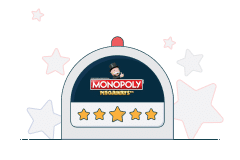 What is the Monopoly Electric Wins RTP?

The Monopoly Electric Wins return to player rate stacks up pretty well at 96.51%. The game’s volatility is in the low to medium category.

What is the Monopoly Electric Wins maximum win?

What is the Monopoly Board Feature?

Roll dice on each spin and work your way around the board that surrounds the reels. Depending on where you land you can own properties and build houses which come into their own during the free spins or land modifiers for the following spin.

Is there a Monopoly Electric Wins free spins bonus?

Once triggered, you’ll play up to 16 free spins. Land on properties that contain houses and hotels and you’ll win bonus cash awards.