Jack in a Pot Slot Review

Join a cheeky leprechaun in the feature-filled slot that is Jack In A Pot. Created by Red Tiger Gaming, it’s a 7 reel, cluster pays slot that comes with loads of extras.

Four different wilds each trigger their own modifier. Trigger the bonus round for 10 free spins. Collect wilds during the free spins for the Feature Frenzy when all the collected modifiers play out in turn.

Find out more in our detailed Jack In A Pot review.

Top Jack in a Pot Casinos


Jack in a Pot Slot Details 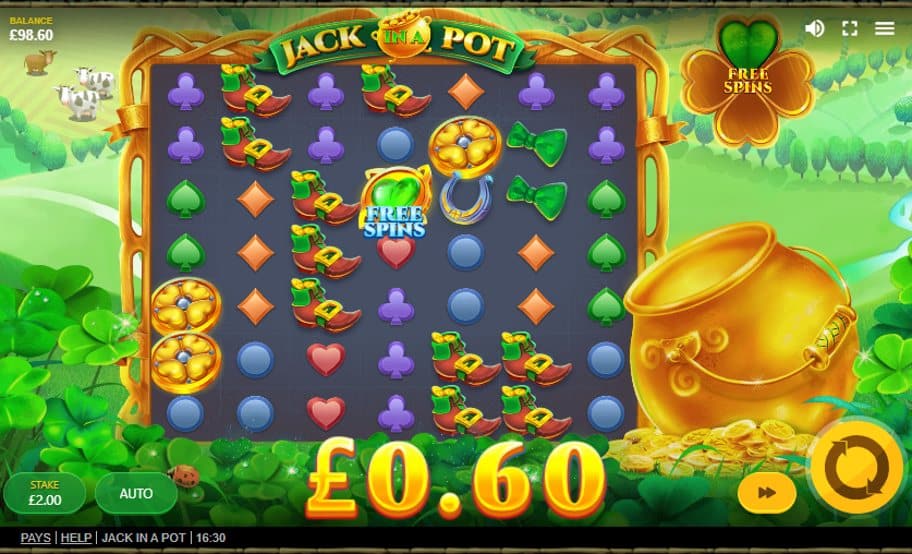 Jack In A Pot is played on a 7 reel, 7 row grid. To form a winning combination, land a cluster of 5 or more matching symbols or wilds. Symbols can be vertical or horizontal in the cluster but not diagonal.

Cascading reels are used here. After a winning cluster lands, the successful symbols are removed from the grid and new symbols drop in and replace them. Cascades keep on coming as long as a new winning cluster is created.

You can play Jack In A Pot at bet levels of between $0.10 and $20 per spin. Just click on the Stake box to adjust your bet size. Autoplay is available too.

The paytable shows payouts as multiples of your total bet.

Jack in a Pot Bonus Features

This Irish fortune-themed slot comes with plenty of variety. A collection of modifiers liven up the base game and there’s a free spin feature where collected modifiers play out at the end of the round.

Jack In A Pot comes with four different wild symbols. As well as substituting for all the standard symbols, these wilds also trigger their own special modifier when they make up part of a winning cluster. 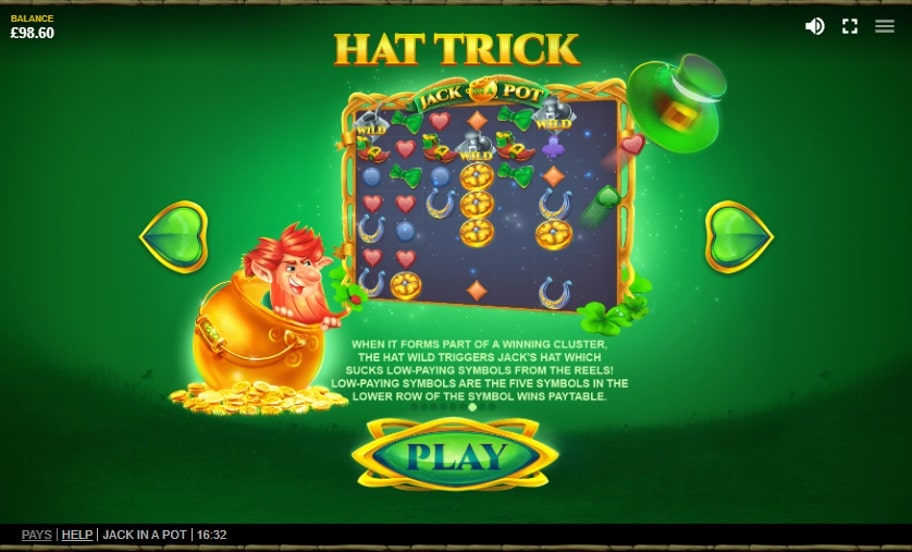 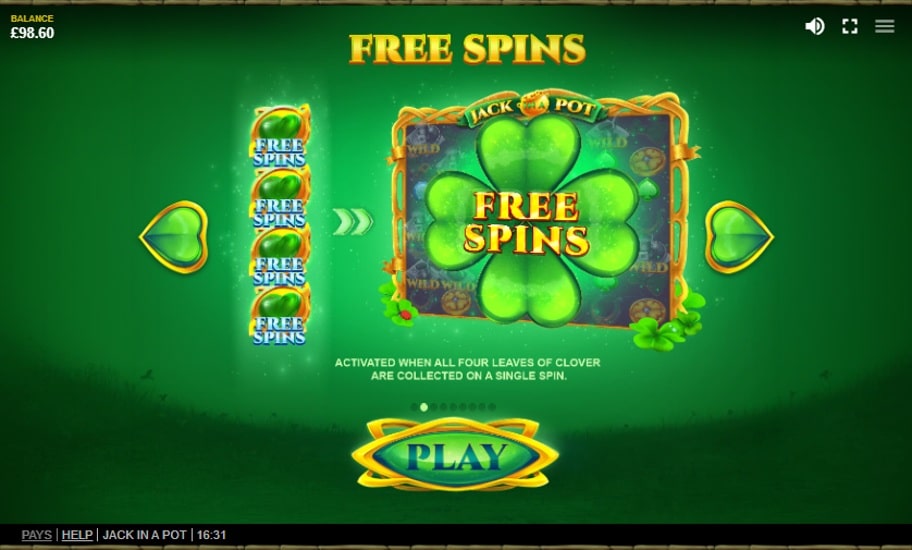 Land a clover scatter and it is collected in the meter at the top of the screen. If you manage to collect 4 clovers during a single set of cascades, you’ll trigger the bonus round. Your reward is 10 free spins.

Any wild that lands during the free spins is collected. After the last spin has taken place, the modifiers from the collected wilds play out in turn to offer multiple winning opportunities.

Jack in a Pot Paytable and Paylines

Design, Theme and Visuals of Jack in a Pot 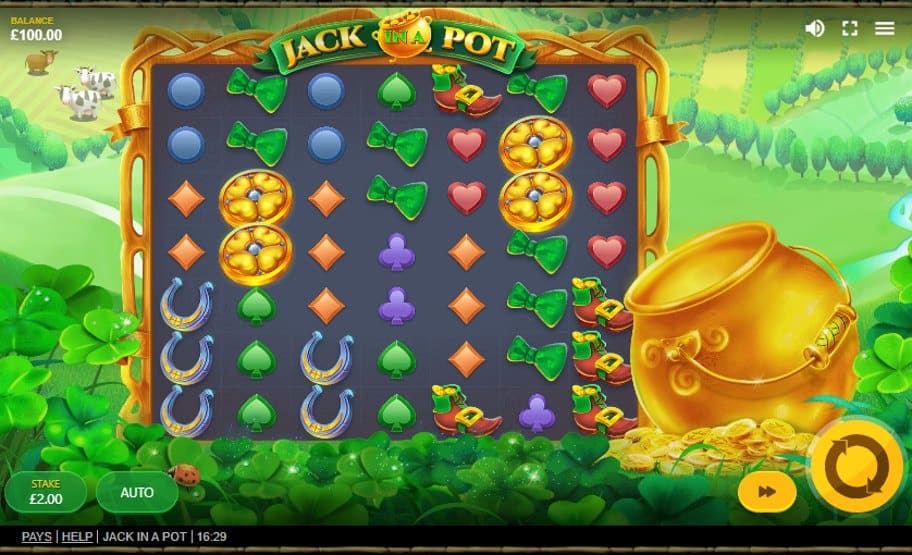 The design in Jack In A Pot is simple but rather nicely done. The reels are set against a backdrop of green fields, cartoon cows and seas of four-leaf clovers. On those reels, you’ll see a circle alongside club, diamond, heart and spade symbols.

The four higher value symbols are the green bow tie, a horseshoe, a leprechaun’s leather boot and a golden four-leaf clover.

They’re joined by the pipe, rainbow, beer and hat wilds and the free spins scatter symbol.

The visuals here are bright, colorful and nice and sharp. Even when playing the Jack In A Pot mobile slot, the imagery is lovely and crisp.

A classic ‘diddly dee’ style jig accompanies the action which is a good fit for the theme.

Jack in a Pot Advantages and Disadvantages

It’s hard to find a fault in Jack in a Pot. The max win is not that impressive compared to some Megaways slots, but it’s great nonetheless.

The positives are multiple, including the 4 potential jackpots up for grabs. The main highlight is the free spins round, enhanced by Wild multipliers.


Jack in a Pot Alternatives

If you like the gameplay in Jack In A Pot have a look at Vault of Anubis. It’s another cluster pays slot from Red Tiger Gaming, this time with an ancient Egyptian theme. The main extra is a free spin bonus, complete with expanding multipliers.

There’s more lucky leprechaun-themed action in Finn and the Swirly Spin, an avalanche reels slot from NetEnt. Played on a 5×5 grid, it comes with 4 random base game extras and 4 different free spins rounds.

Finn and the Swirly Spin

Charming cartoon design
Loads of features
Low volatility won’t be for everyone.

What are the Jack In A Pot Wild modifiers?

Each of the game’s four wilds triggers its own modifier when it makes up part of a winning cluster. These can fill reels with matching symbols, remove low value symbols, add trails of matching symbols or add colossal symbols.

Is there a Jack In A Pot free spins bonus?

Yes, trigger the bonus round and you’ll receive 10 free spins. Any wilds that land are collected. After you’ve played your final spin, the collected modifiers play out in turn.

What are Cluster Pays?

In a cluster pays slot, winning combinations are created by landing clusters of 5 or more matching symbols or wilds.

Is there a Jack In A Pot free play slot?