Not to be confused with the iSoftBet slot of the same name, Imperial Wealth is a 5 reel, 30 payline video slot from Japanese powerhouse Konami.

There’s a bit more going on here than you’ll usually find in a slot from this developer, starting with the Lucky Frame Feature, where multiple reels transform to reveal the same symbol.

You could also land up to 88 free spins with more transforming symbols. 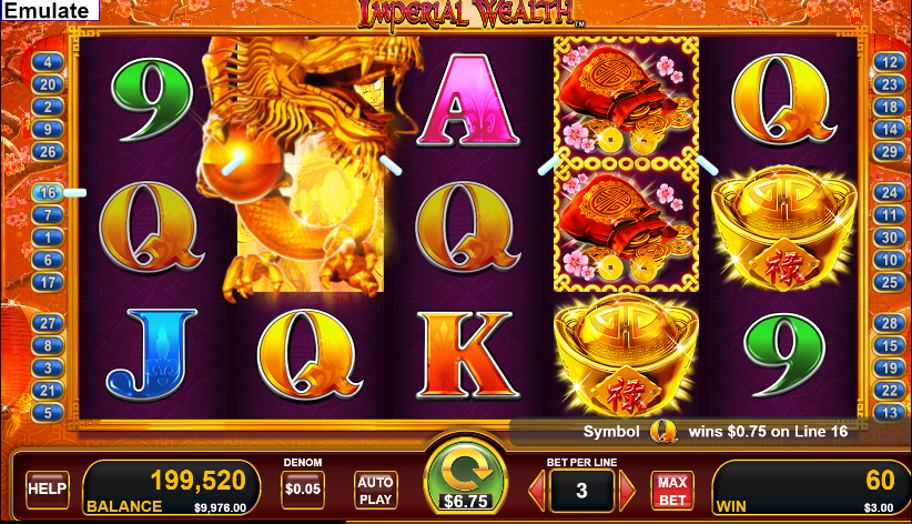 Imperial Wealth is played on a 5 reel, 3 row, 30 payline machine. To form a winning combination, land 3, 4 or 5 matching symbols or wilds from left to right in a payline starting from reel 1.

Many slots in the Konami catalogue are disappointing when it comes to return to player rates. The Imperial Wealth of RTP is an improvement at 96.05% which is about average.

We found the volatility here to be in the medium range.

If you’ve find some Konami releases a bit on the vanilla side when it comes to features, Imperial Wealth should be more to your liking. As well as the usual stacked symbols, you’ll find the Lucky Frame feature which transforms reels so they display matching symbols. There’s also a potentially exciting free spin bonus.

Like many Konami slots, Imperial Wealth comes with Action Stacked Symbols. These stacked symbols can appear on all 5 reels and can be anything other than the wild. 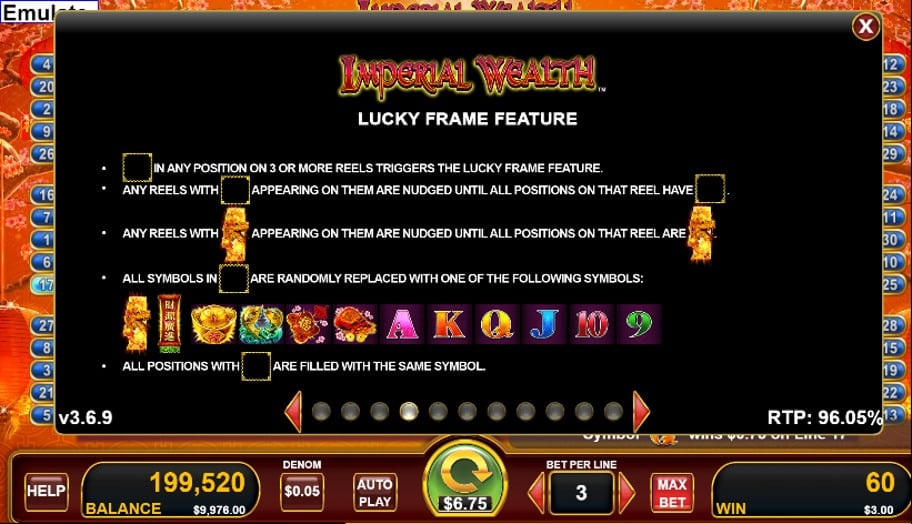 Keep a special eye out for special golden frames which can appear around symbol positions. Land 3 or more golden-framed symbols on the same spin and you’ll trigger the Lucky Frame Feature.

The reels that contain the frames nudge up and down so that all the positions on that reel contain golden frames. If there’s a dragon wild on a reel with a golden frame, the whole of that reel turns wild.

All the positions with a golden frame will then transform into the same matching symbol. This can be anything including both the wild and the scatter. A new payout calculation is then made one the new symbol has been revealed. 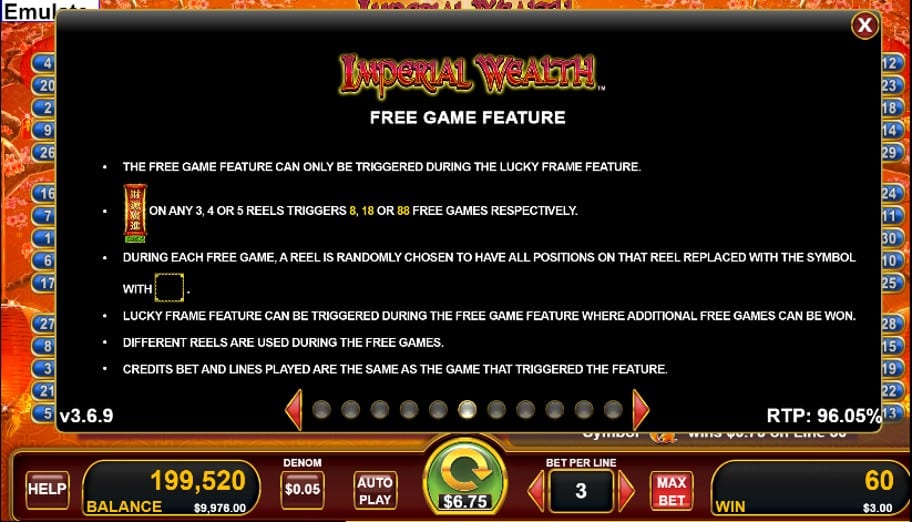 Land 3, 4 or 5 fully stacked banner bonus symbols on the same spin to activate the game’s other feature – the free spins bonus.

On each spin, one reel is picked at random. This reel will be filled with golden frames containing the same matching symbol.

You can trigger the Lucky Frame feature during the free spins too. It’s in this way that you can potentially re-trigger more free spins. 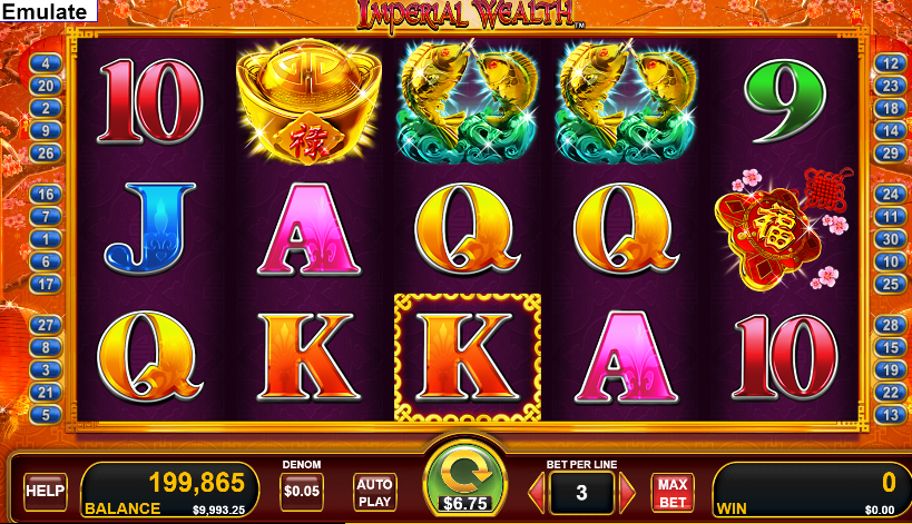 It’s not just the gameplay that impresses in Imperial Wealth. The design does too. This is a much better looking and sounding slot than many others in the Konami catalog.

Set against a golden, sun-kissed backdrop with multiple magical lanterns, the regal purple reels are made up of brightly colored A to 9 royals, a pouch full of gold coins, a Chinese letter, goldfish and gold pots.

The roaring golden dragon is the wild symbol. This substitutes for all the standard symbols when it makes up part of a winning combination.

Finally, there’s the Imperial banner which is the scatter. This can appear during the Lucky Frame feature and trigger the free spins.

The imagery here is impressively drawn. You’ll also hear a Chinese-style soundtrack in the free spins as well as the usually casino-style bangs and bleeps. It all comes together rather nicely.

Imperial Wealth’s RTP is nothing too impressive, but it’s great relative to other Konami slots and even classics like Bonanza.

Moreover, you can look forward to an impressive free spins round with up to 88 free games. The mystery transforming symbols are a great rewarding element as well. To top it off, this is one of the best-designed Konami slots out there.

Fans of Asian-themed slots might enjoy Koi Princess from NetEnt. It comes with an impressive Manga-style design and a huge variety of features, including randomly triggered modifiers and 4 feature rounds.

More Asian action is available in Path of Destiny from Red Tiger Gaming. This is more Indian than Chinese and comes with an excellent free spin bonus where colossal coin symbols can guarantee winning combinations.

As we’ve already mentioned, there’s another Imperial Wealth slot from iSoftBet. It’s worth a look, too, thanks to the lions that can deliver added wilds, wild reels, or 5-of-a-kind wins. There’s also a free spin bonus with added wilds and multipliers.

What is the Lucky Frame feature?

Land 3, 4 or 5 golden frame symbols on the same spin to trigger this bonus round. The frames nudge to fill the whole of their reel. They then reveal the same matching symbol and a new payout consideration follows.

Is there an Imperial Wealth free spin bonus?

What is the Imperial Wealth return to player rate?

The Imperial Wealth RTP is 96.05% which is about average, and it compares well to popular classics like Starburst by NetEnt or Bonanza by Big Time Gaming.

Can you play Imperial Wealth for free?

The features here are a little unusual so we recommend trying out the Imperial Wealth free play slot first if you can. The demo slot is available on all devices including desktop computers, tablets and cellphones.

Jovana Gjorgievska
More details
Details
Written by: Jovana Gjorgievska
Author
I have a unique insight into the mathematical aspects of the gaming industry. My passion for analytics guides me in delivering expert reviews on apps, bonuses, payment methods, and online casinos.
Slots