Take a journey through space in Hypernova Megaways, a simple 6 reel video slot from ReelPlay where the number of ways to win can reach 117,649.

The main extra in this interstellar adventure is the Jackpot Re-spins Bonus. It’s a variation on the classic streak re-spin feature where collecting scatters delivers cash prizes and jackpots that offer awards of up to 2,000x bet.

Find out more in our in-depth Hypernova Megaways review. 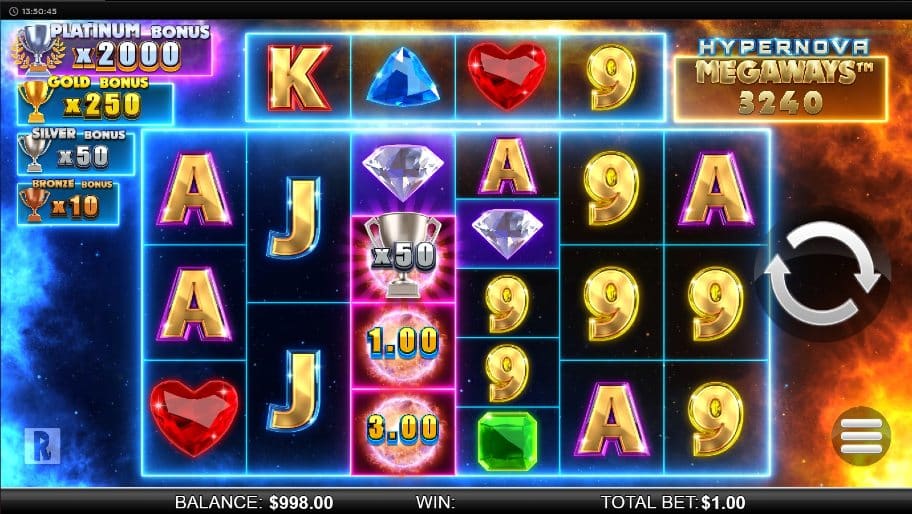 Hypernova Megaways uses the classic Megaways mechanic. There are 6 reels in play. Between 2 and 7 symbols can appear on each reel on any spin. The more symbols in play, the more Megaways. If all 6 reels contain a maximum of 7 symbols, you’ll have 117,649 ways to create a winning combination.

Those winning combinations are formed in the usual manner by landing 3, 4, 5 or 6 matching symbols from left to right on adjacent reels, starting from the leftmost reel.

You can play Hypernova Megaways at bet levels of between $0.40 and $60 per spin. The game’s RTP is 96.10% which is about average. We found the volatility to be in the medium range with the maximum win coming in at 6,250x bet. 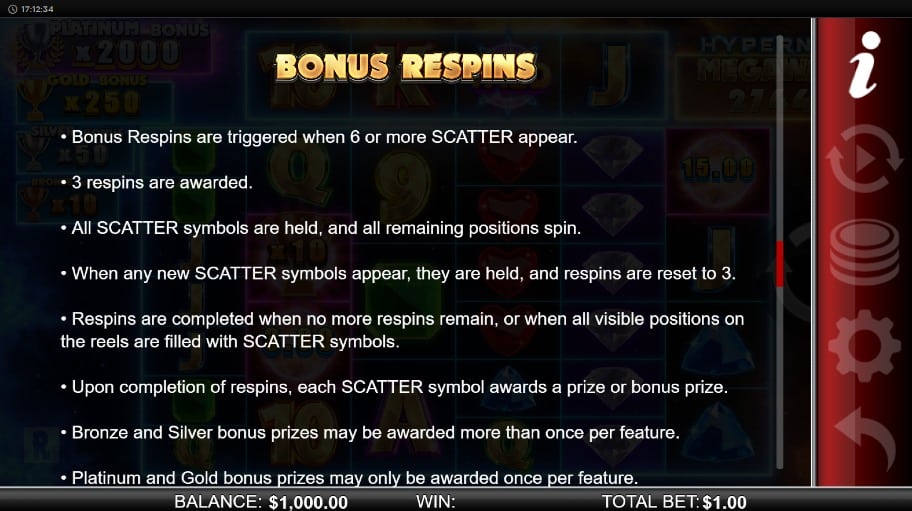 The gameplay in Hypernova Megaways is a little different from what you’ll usually find in a slot with this mechanic. The main extra is a Bonus Re-spin round. Collect scatters and trophies to win cash prizes and 4 potential jackpots.

Like many Megaways slots, Hypernova Megaways comes with reaction wins. After a winner is formed, those symbols are blasted off the game grid and new symbols appear and replace them. A new payout consideration follows. Land a new winning combination and another reaction follows. These keep on coming until there’s one where no new reaction win takes place.

There’s only one feature round in Hypernova Megaways but it’s a good one. Trigger it by landing 6 or more Hypernova scatter symbols anywhere on the reels on the same spin.

The triggering scatters lock in position and 3 re-spins are awarded. If a new scatter lands, it also locks in place, and the re-spins reset to 3. The other symbols to look out for during this round are 4 trophies, each of which can deliver a jackpot prize.

The round comes to a conclusion when you’ve run out of re-spins, or you’ve filled all 42 positions on the grid with scatters or trophies.

Each scatter comes with a prize worth between 1 and 100x bet attached. These prizes are added together to give you an overall payout.

If you’re lucky enough to see a trophy symbol drop onto the grid, you’ll win the associated prize. These come on top of any accumulated scatter prizes. 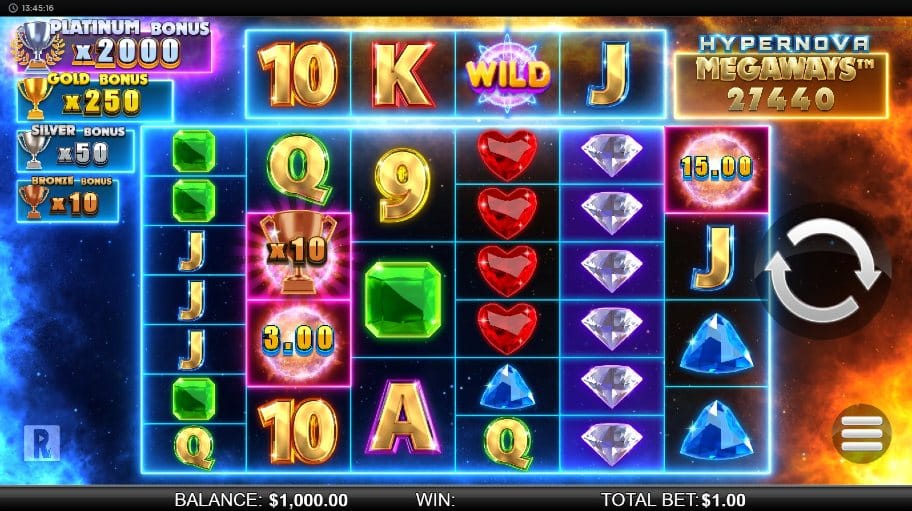 There’s a clean, crisp look to the visuals in Hypernova Megaways. Set against a deep space backdrop, the reels are made up of gold 9 to A royals, blue, green, and red gemstones, and a shimmering white diamond.

There’s also a wild that can appear in the top position on the middle 4 reels. This symbol substitutes for everything bar the scatter.

The hypernova symbol is the scatter. Landing 6 or more of these on the same spin triggers the Bonus Re-spins feature.

The imagery is straightforward but stands out nicely against the dark backdrop. It’s also super sharp if you’re playing on a device with a smaller screen.

There’s a sweeping, futuristic soundtrack playing in the background while you spin, which is an excellent fit for a slot with this galactic theme.

The theme looks no further than Starburst for hypnotic gameplay and a space. This NetEnt slot is one of the most popular of all time, thanks to its stacked wilds re-spins.

NetEnt has added to that classic formula by releasing Starburst XXXtreme. The sequel adds extra variety to the gameplay, including multiplier wilds that can deliver multipliers of up to 150x.

For more galactic Megaways action, try Starquest Megaways. It’s a simple 6 reel slot where re-spins with expanding wilds offer the best opportunities to land an out of this world prize.

Alternatives to the Hypernova Megaways slot

What is the Bonus Re-spins feature?

This is a variant of the classic streak re-spin feature. Once triggered, the scatters lock in place, and 3 re-spin follows. Land a new scatter, and it’s also held, and the re-spins reset to 3. When you’ve used up all your re-spins, the prizes attached to the scatters are combined to give an overall prize.

Is Hypernova Megaways a jackpot slot?

What is the Hypernova Megaways RTP?

The Hypernova Megaways return to player rate is 96.10%. The volatility is in the medium range, with the maximum win at 6,250x bet.

Can you play Hypernova Megaways on your phone?

Yes, you can. The Hypernova Megaways free play and the real money slots are available on all devices, including desktop computers, tablets, and smartphones.

Jovana Gjorgievska
More details
Details
Written by: Jovana Gjorgievska
Author
I have a unique insight into the mathematical aspects of the gaming industry. My passion for analytics guides me in delivering expert reviews on apps, bonuses, payment methods, and online casinos.
Slots