Expect to see plenty of emerald symbols here as they all transform into the same matching symbol each time they land.

Find out more in our detailed Emerald Smash review.

Emerald Smash is played using a 5 reel, 3 row, 30 payline machine. Winners are created in the usual manner for a paylines slot by landing 3, 4, or 5 matching symbols from left to right in a payline, starting from reel 1.

Bet levels in Emerald Smash start at $0.30 but can reach a maximum of $90 for the high rollers. To adjust your bet size, click on the coins icon alongside the reels, then choose from the options shown.

Autoplay is available if required too. Press and hold the spin button; you can run between 5 and 100 auto spins and complete win and loss limits.

The Emerald Smash RTP is 96.50% which is better than average. The volatility is in the medium range. The most you can win from a single spin is a 500x bet. Do this by filling all 15 positions on the reels with the most rewarding red 7 symbol.

Emerald Smash will probably be a game to swerve if you enjoy slots that offer plenty of variety. The gameplay here is very simple. There isn’t even a wild symbol, let alone any free spins, pick-me bonuses, or cash trails. The only extra is the Emerald Smash feature.

The emerald symbol is central to much of the best action on offer in this slot. On each emerald symbol landing, the Emerald Smash feature is triggered.

As its name suggests, the emeralds are smashed from the reels, and a new symbol comes in and replaces them.

All emeralds turn into the same matching symbol, and a payout consideration is made. Creating some big winning clusters of symbols is possible if the green gems fall nicely. That’s it as far as features go, though. 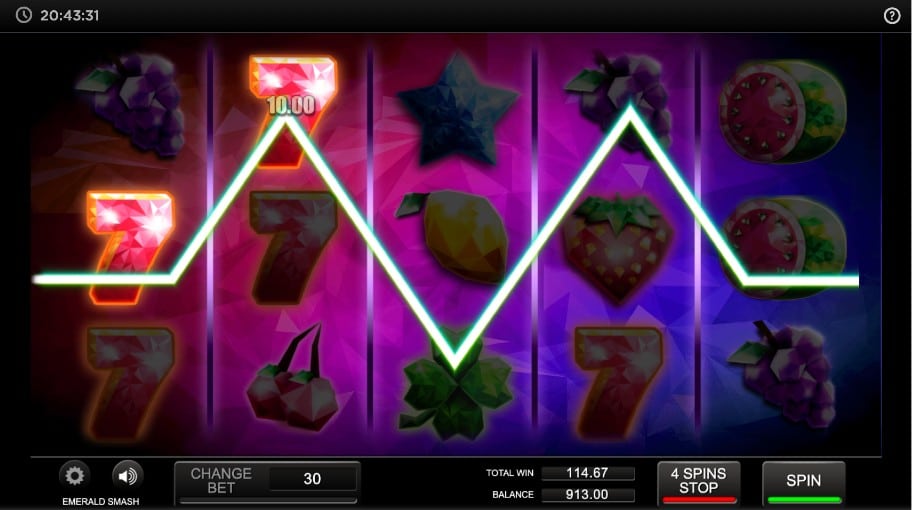 Like the gameplay, the design in Emerald Smash is simply done. The visuals do have a futuristic feel, though.

Set against a purple and blue backdrop, the reels are composed of nine symbols commonly found on a classic fruit machine. They appear as crystals and are very easy on the eye.

In order of value are cherries, grapes and peaches, melons, strawberries and oranges, and four-leaf clovers and stars. Top of the bill as far as payouts go is the lucky red 7, which awards 16.66x bet if you land 5 in a line.

Accompanying the action is a futuristic retro-style soundtrack that matches the futuristic visuals perfectly.

It’s simple yes, but the design here is nicely put together.

Emerald Smash is similar to the classic Starburst. It’s an extremely simple slot with no bonus features or free spins, but the reward potential is excellent.

If you can get past the slightly repetitive gameplay, you can run into a nice streak of spins that can accumulate some impressively big wins in the long run. We don’t recommend this slot to beginners or casual players since it can take some time to get going.

If you like the simple hypnotic gameplay in Emerald Smash, consider playing Starburst. This classic from NetEnt has become a huge fan favorite thanks to its classy design and re-spins with stacked wilds.

Starburst XXXtreme is the sequel to NetEnt’s sci-fi classic and offers a similar design to the original release. You’ll find more features here and potentially much bigger jackpots.

Shimmering jewels can deliver plenty of action in Lightning Gems, a 5 reel, 10 payline win both ways slot from NextGen. Highlights include lightning bolts that can nudge reels into winning positions and add extra wilds into play and a free spin bonus.

Wide variety of extras
Huge potential wins of up to 200,000x
Variance is very high

What is the Emerald Smash feature?

What is the Emerald Smash RTP?

Can you play Emerald Smash for free?

Yes, Inspired Gaming has created an Emerald Smash free play slot so you can take it for a test spin in demo mode. Demo mode is available at all Emerald Smash casinos. You can play without limits for practice.

Is there an Emerald Smash mobile slot?

Yes, the game has been fully optimized for play on all devices including smartphones, tablets and computers. The simple gameplay and stylish design make the Emerald Smash mobile slot very playable.