Take to the skies in Eagles’ Flight, a Native American-themed slot from High 5 Games. Played using a 5 reel, 40 payline machine, the most lucrative eagle symbol can appear as a single or double which means you can create 10-symbol winners.

The other main feature here is the bonus round where you can look forward to 7 free spins.

Does this slot soar? Find out in our in-depth Eagles’ Flight review. 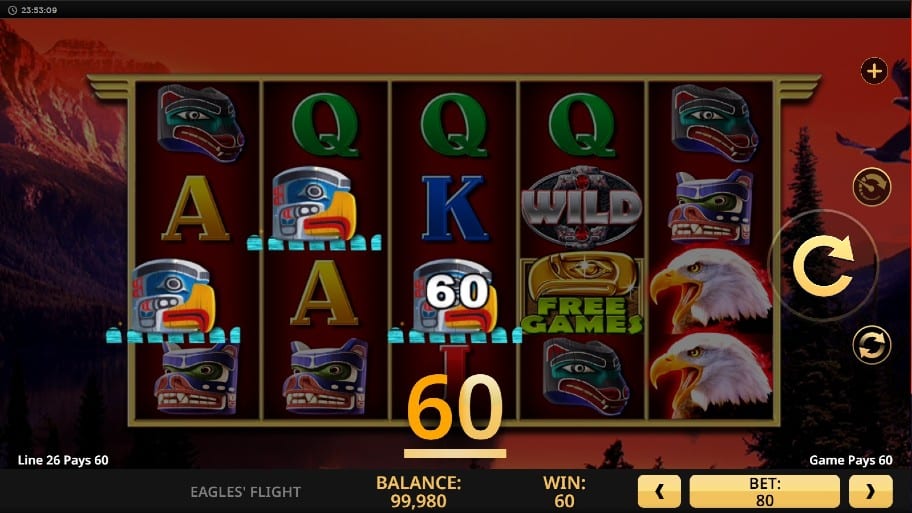 Eagles’ Flight is played on a 5 reel, 4 row, 40 payline machine. Winning combinations are formed by landing 3 or more matching symbols from left to right in a payline, starting from the leftmost reel.

You can head to this American wilderness at bet levels that range from between $0.40 and $200 per spin.

Click on the autoplay button below the main spin button and you can set between 10 and 500 autospins as well as win and loss stop limits. There’s also a turbo mode. It’s all very simple, intuitive and easy to manage.

The Eagles’ Nest RTP is 96.50% which is better than average. The setting might be high up in the sky, but the variance here certainly isn’t sky-high. In fact, the Eagles’ Nest volatility is low.

This is one of the more st 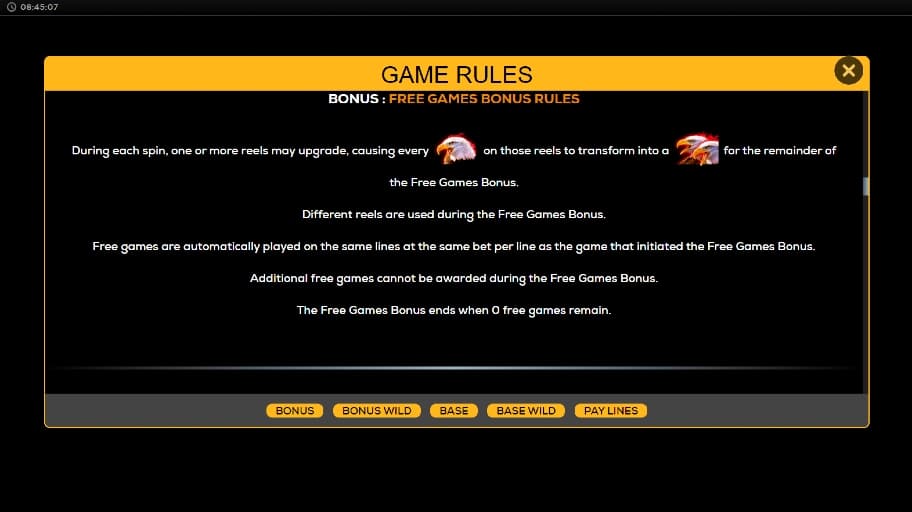 raightforward slots from High 5 Games when it comes to features. The main extras here come in the form of the double eagle symbol and the free spins round.

The eagle is the game’s most rewarding standard symbol. The symbol can land with 1 or 2 eagle heads on it. If there are 2 eagle heads on display, they count as the equivalent of 2 standard symbols. That means it’s possible to create winning combinations that are up to 10 symbols long. Manage that and you’ll scoop a payout of 50x bet.

The free games scatter symbol can land on reels 2, 3 and 4 only. Land 3 of them on the same spin to activate the bonus round. Your reward here is 7 free spins. Just like in the base game, the eagle can appear as a single or double symbol. 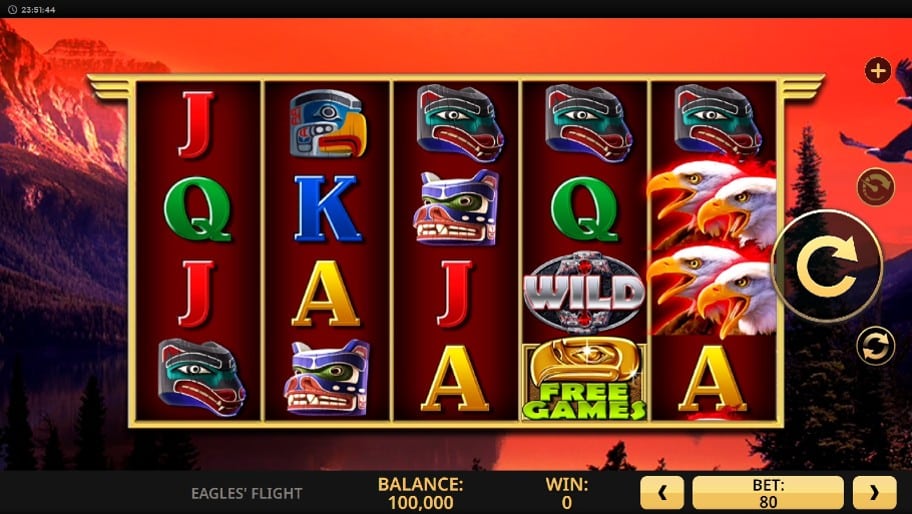 Mountains, forests and blood-red skies form the backdrop to the reels here. There you’ll find J, Q, K and A alongside three finely carved animal head totems. The eagle is the best symbol. When this forms part of a winning combination you’ll see an animated sequence where the eagles soar through the air.

There’s also a wild. This can land on reels 4 and 5 only. It substitutes and counts for a single symbol in a winning combination. The only exception to that being the eagle where it counts as two symbols.

There’s a rather haunting soundtrack playing in the background while you spin. This slice of Americana is a good fit for the rugged, wilderness theme.

The design here is simple but works nicely on all devices, including the Eagles’ Flight mobile slot.

The great American wilderness is also the setting for Eagle Bucks, a 5 reel, 20 payline video slot from Ainsworth. The highlight here is the bonus feature where you’ll play 10 free spins, complete with expanding and potentially frozen wilds.

Griffin’s Throne is a myth and legend-themed slot from IGT. Look out for re-spins where wild and griffin symbols are held and a colossal column filled with wilds and multipliers appears. There are also free spins which are played an expanded set of reels that offers 90 rather than the usual 30 paylines. The multiplier re-spins can hit here too.

Another IGT-powered classic is Siberian Storm which transports players to the from Russian tundra. Played using a 5 reel, 720 ways game engine, the main attraction here is the free spin bonus.

What is the Eagles’ Flight RTP?

The Eagles’ Flight return to player rate is 96.50%. This is above average. The volatility here is low though.

Yes, there’s an Eagles’ Flight free spins bonus. It’s triggered by landing scatters on the middle 3 reels on the same spin. You can then look forward to playing 7 free spins.

Can you play Eagles’ Flight on your phone?

Yes, High 5 Games has created versions of Eagles’ Flight that have been fully optimized for play on cellphones as well as on tablet and desktop and laptop computers.

Can you play Eagles’ Flight for free?