Join a sharp-shooting sheriff in the Wild West adventure that is Dead or Alive. Created by NetEnt, it’s a 5 reel, 9 payline video slot that’s gone on to gain cult status since first hitting the online casino shelves way back in 2009.

The main draw here is the bonus round that awards a minimum of 12 free spins complete with sticky wilds and a 2x multiplier with all payouts doubled.

Find out if this Cowboy classic has stood the test of time in our detailed Dead or Alive review.

Dead or Alive is played on a 5 reel, 3 row, 9 payline machine. Winners are formed in the standard manner for a paylines slot by landing 3, 4 or 5 matching symbols or wilds from left to right in a payline starting from reel 1.

The hit rate is 30.4% so on average, you can expect to land a winner on just under a third of spins. This can vary greatly over the short term of course.

The RTP isn’t the only thing that high. The Dead or Alive volatility is too. This is a high risk but potentially high reward slot. Expect plenty of spells when your sharp shooting will come to very little. It’s possible to land a big haul in a flash though.

The maximum win in the base game is 6,000x stake. This rises to a maximum of 12,000x stake in the free spins round thanks to the 2x win multiplier.

The range of extras on offer in this Wild West adventure isn’t enormous. There’s only one feature round available here. The combination of free spins, sticky wilds and 2x multipliers mean that it is well worth hitting.

The bonus round is triggered in the usual manner by landing 3, 4 or 5 pistols scatter symbol anywhere on the reels on the same spin. After a payout of 4, 25 or 2,500x stake, you’ll go on to play 12 free spins.

Boosting your winning chances here is a 2x win multiplier. Each time you land a winning combination during the free spins round, the standard payout is doubled.

One re-trigger is possible too. Landing 3 or more scatters on the same free spin adds another 12 free spins to your current tally.

The 2x win multiplier isn’t the only thing that boosts your winning chances when you trigger the free spins feature. Also in play are sticky wilds.

When a wild wanted posted lands during the feature, it locks in position for the remainder of the round.

If you manage to land a sticky wild on all 5 reels during the bonus you’ll also receive another 5 free spins.

If you want to get an idea of the what the bonus round has to offer, click on the Feature Preview button in the bottom right-hand corner of the screen which offers a video clip of what you can expect from the free spins.

Dead or Alive Paytable and Paylines

Design Theme and Visuals of Dead or Alive

Despite being a veteran as far as online slots go, the design in Dead or Alive has stood up rather well given its age.

A Wild West frontier town is the setting here. The reels are made up of A to 10 royals, glasses of bourbon, cowboy boots, a pistol and holster, a Stetson and the sheriff’s badge.

The wanted poster is the Wild with the pair of pistols the Scatter.

It might not have the high def sheen of more recent releases but the visuals in Dead or Alive are rather impressive. As is the soundtrack which has a real Wild West flavour, complete with the occasional crack of a bullwhip.

It all comes together very nicely whether you’re playing on a desktop computer or on a smaller screen device like a tablet or smartphone.

Dead or Alive Advantages and Disadvantages

Dead or Alive proved so popular it spawned a sequel. Dead or Alive 2 keeps to a similar formula to the original, combining atmospheric design with expanded features. The second release in the series comes with 3 free spin bonuses, with a host of wild and multiplier extras.

If you like the Wild West theme, give Blueprint Gaming’s King of the West a look. The visuals and spaghetti western-style soundtrack are as good as you’ll find anywhere. The gameplay stacks up well too thanks to a Bounty Hunter Prize Wheel, Wanted Wilds and Free Spins on enhanced reels.

Trigger the Hunter xNudge Wild feature and bounty hunter wilds nudge to become fully visible, increasing a multiplier for each nudge. In the Shoot Out bonus all the low value symbols on the middle 3 reels transform into wilds. There are also 3 free spin bonuses.

Super volatile, it offers bumper payouts of up to 13,000 stake. 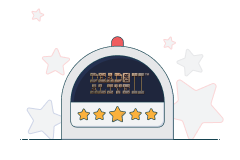 King of the West 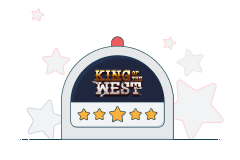 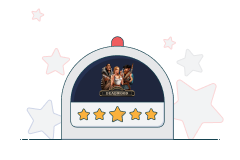 Is there a Dead or Alive free spins round?

Yes, trigger the round and you’ll play 12 free spins. All payouts are boosted by a 2x multiplier and doubled. Wilds are sticky here too. Land 5 wilds and you’ll get 5 more free spins. With a standard re-trigger, you could end up with 29 free spins in total.

What is the Dead or Alive RTP?

The Dead or Alive return to player rate is 96.82% which is well above average. The hit rate of 30.4% means that you’ll land a winning combination on just under a third of spins.

Is Dead or Alive volatile?

Yes, this Wild West shootout is a potentially fiery one. The Dead or Alive volatility definitely comes in the high category. The maximum win is 6,000x in the base game and 12,000x during the free spins round.

Is there a Dead or Alive free play slot?

You can try out Dead or Alive in demo mode if you wish on your desktop, tablet or cellphone.