Head to the great American plains and try and unleash a stampede of coins in Buffalo King Megaways.

Created by Pragmatic Play, it’s a 6 reel video slot where the number of ways to win can get as high as 200,704.

Super volatile, it comes with tumbling reels and free spins with multiplier wilds and maximum wins of 5,000x bet per spin. 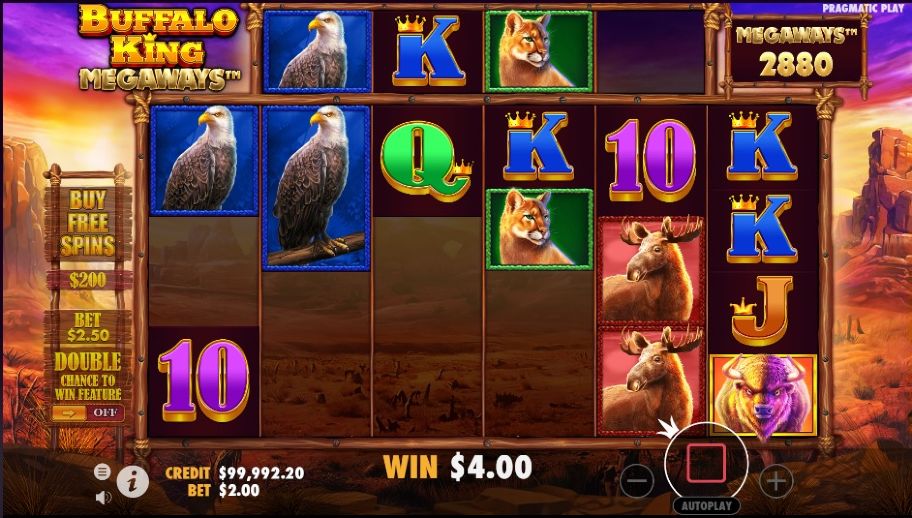 Buffalo King Megaways is played using a 6-reel machine. The number of symbols that appear on each reel change with each spin. If all the reels have the maximum number of symbols, you’ll have a massive 200,704 ways to win.

Winners are formed in the usual manner for a Megaways slot by landing 3 or more matching symbols or wilds from left to right on adjacent reels, starting from reel 1.

After a winner lands a tumble follows. The winning symbols are blasted off the grid and new symbols drop in to replace them. A new payout consideration follows. If that results in a new winner, another tumble takes place. These continue until no new winner lands.

The Buffalo King Megaways RTP is 96.52% which is better than average. The volatility here is extremely high with the maximum win coming in at 5,000x bet from a single spin. 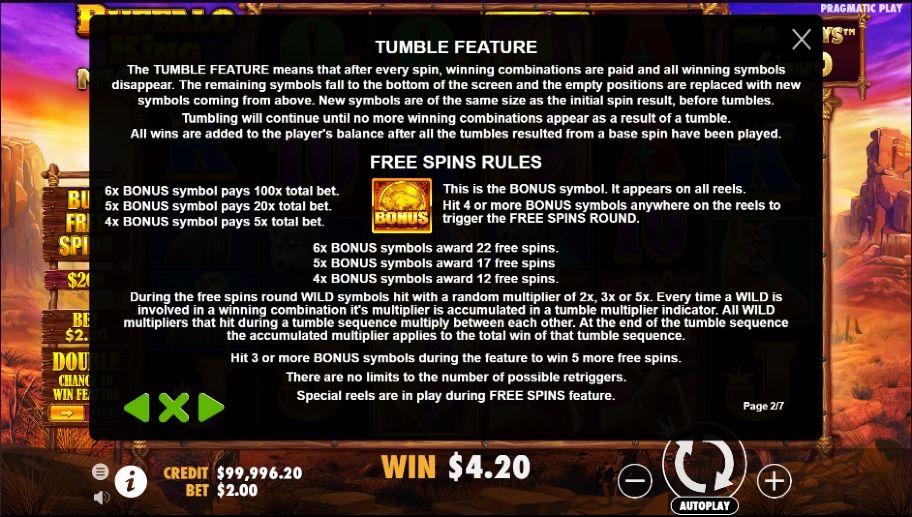 You’ll find some classic Megaways features in this trip to the wild American frontier. The highlight is the free spin round where multiplier wilds can really get things moving.

Hope to see plenty of wilds land during the free spins as they come with multipliers attached which can boost payouts by 2x, 3x or 5x. Whenever a wild lands, the value is added to the Tumble Meter next to the reels. Land more than one wild in a single set of tumbles and the value of the multipliers in the Tumble Meter is combined to deliver an even bigger payout boost.

For example, land a 2x multiplier wild on a free spin and a 3x multiplier on the first tumble then a 6x multiplier would be active on subsequent tumbles. Land another wild and the multiplier increases still further.

The Tumble Meter empties and resets to 1x whenever there’s a winless tumble.

Re-triggers are possible in the free spin round. Land 3 Bonus symbols and 5 extra free spins are added to your current tally. There’s no cap on how many times you can potentially re-trigger the free spins.

In some territories, players can increase their stake from 20 to 25 coins per spin to bring the Ante Bet into play. For example, a $1 per spin bet in standard mode rises to $1.25 per spin if the Ante Bet is live. Payouts remain at the standard $1 level but the Ante Bet doubles your chances of triggering the free spin round.

Players in some territories will also have the opportunity to buy the free spins round for a fee of 100x bet. 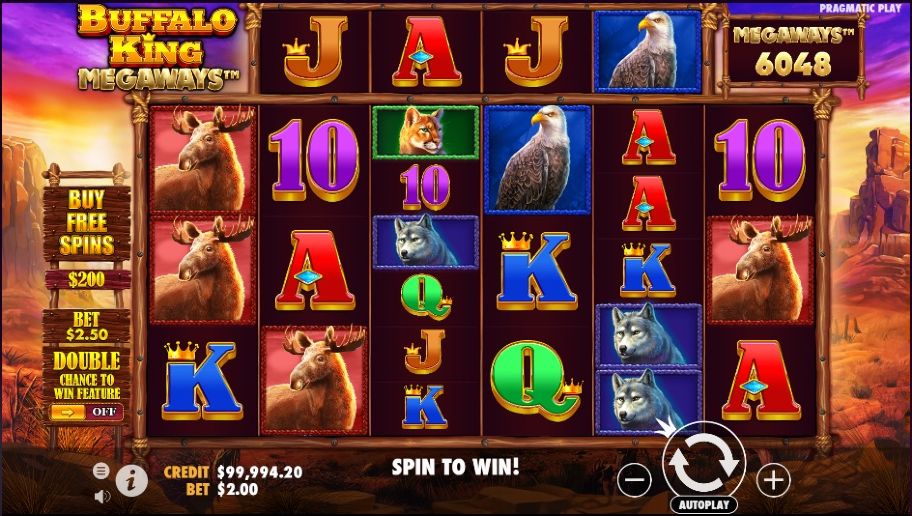 There’s a rugged, outdoors feel to the design in Buffalo King Megaways. The reels are set against a dusty canyon backdrop. There you’ll find A to 9 royals as well as moose, wolf, big cat, eagle and buffalo symbols.

There’s also a wild that substitutes for everything apart from the scatter. This can land on reels 2, 3, 4 and 5 only. Finally, there’s the Bonus symbol which can trigger the feature round if you land 4 or more of them on the same spin.

There’s a rather impressive slice of Americana playing in the background while you spin. The twangy soundtrack matches the theme perfectly and gives the game plenty of atmosphere.

Buffalo King Megaways is an outstanding slot, with over 200,000 ways to win, huge winning potential and great audio-visual qualities. Hands down, it’s one of the best Megaways slots out there.

The downside is its super-high volatility. Your experience with this game will vary, and its generally best played with a higher budget over a longer game session.

The bulk of your wins will come from the free spins round. If you are stuck too long in the base game, the slot can eat up your bankroll rather quickly.

Before this Megaways version was released, Pragmatic Play had previously launched a 6 reel, 4,096 ways to win Buffalo King slot. Just as volatile as the Megaways version, it offers an enormous maximum win of over 93,000x bet!

If you like the rugged theme but not the sky-high volatility in the Pragmatic Play releases, check out Big Buffalo Megaways from Skywind. It comes with a bonus round that awards up 100 free spins with wild multipliers.

The Scandinavian wilderness is the setting for Untamed Wilds, a 5 reel, 20 payline slot from Yggdrasil Gaming. Played in a variety of game modes, it comes with symbols that can expand, add multipliers and duplicate. There’s also a free spin bonus.

What is the Buffalo King Megaways RTP?

The Buffalo King Megaways return to player rate stacks up pretty well against similar slots, coming in at an above average 96.52%.

Yes, if we were to rate the Buffalo King Megaways volatility on a scale of 1 to 5, we’d put it at the maximum of 5 so tread carefully. The most you can potentially win from a single spin is 5,000x stake.

Is there a Buffalo King Megaways free spin feature?

Yes, landing 4, 5 or 6 bonus symbols will get you 12, 17 or 22 free spins. Look out for multiplier wilds here which can combine to deliver some decent payout boosts.

Is there a Buffalo King Megaways free play slot?

Yes, a demo mode is available so you can try this slot out for free. There’s a Buffalo King Megaways mobile slot as well as versions that have been optimized for desktop and tablet devices.