Go mining for treasure in the Bonanza Megaways slot, a 6 reel game from Big Time Gaming where the number of ways to win can reach up to 117,649. The slot that initiated the explosion in popularity of slots with this mechanic, Bonanza Megaways comes with reaction wins which can deliver wave after wave of action. The main extra here is the Free Spins feature which awards a minimum of 12 free spins. Boosting your winning chances here is an unlimited win multiplier which increases by 1 with each reaction win. Find out more about this game-changing slot in our deep dig Bonanza Megaways review. 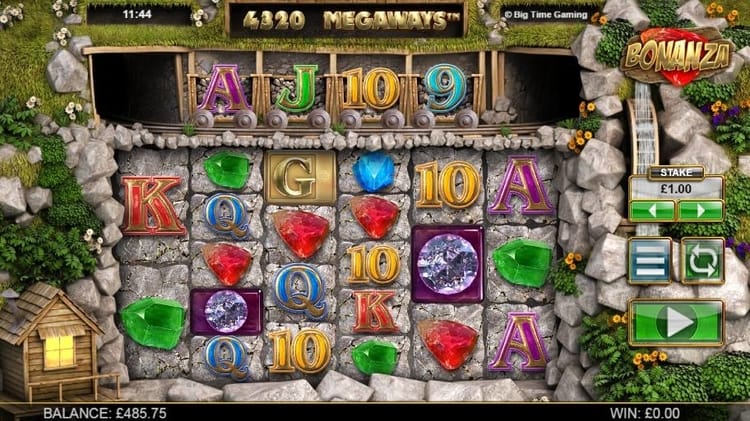 With a mining theme, the Bonanza Megaways slot might not quite have the visual flair of some more modern Megaways titles but the design in this mining extravaganza is more than up to the job.

Released in December 2016, the up-tempo, Hillbilly-style soundtrack is a perfect fit for the theme and is a major factor of its popularity. A rocky mine is the setting.

On the reels are A to 9 royals which appear alongside 4 more rewarding gemstone symbols. The highest paying symbol is the purple gem. Land a combination of 6 purple stones on adjacent reels and you can look forward to a payout of 50 x your total bet.

The sticks of dynamite symbol is the wild. This can appear on the top window on the middle 4 reels. This replaces all the standard symbols when it makes up part of a winning combination. The scatter is slightly unusual. The letters that make up the word GOLD are all scatters. Land the whole word and you’ll trigger the Free Spins feature which we’ll look at in detailed below.

You can play Bonanza Megaways on all devices including desktop computers, laptops, tablets and cell phones. Even with all the moving parts, the design and gameplay stack up really nicely if you’re playing on a handheld device with a small screen.

The Bonanza Megaways slot is played using a 6 reel machine and the Megaways engine. The number of symbols that appear on each reel changes with each spin. The more symbols on display, the more opportunities you’ll have to create a winning combination. If all the reels contain the maximum number of symbols, you’ll have 117,649 Megaways in play.

Winning combinations here are formed by landing 3 or more matching symbols or wilds on adjoining reels from left to right, starting from the leftmost reel. Symbols don’t necessarily have to be next to each other, anywhere on the reel will do.

You can try and mine a bumper payout here at bet levels that range from between .20 cents to $40 per spin. Use the arrows below the stake box to adjust your bet size. Click on the settings to open up the paytable. Payout amounts are shown as multiples of your total bet. It’s all nice and easy to follow.

You will also find an Auto function which allows up to 100 autospins. Then you can set loss and single win limits. Any trigger of the Free Spins feature will stop the autospins immediately.

The Bonanza Megaways RTP is 96% which is about average for an online slot game. The volatility here is in the medium to high range and ranked by developer Big Time Gaming as 3/5.

The maximum win is 12,000 x your total bet per spin. Whilst this can be won on any spin, including the base game, your chances increase during the free spins due to the unlimited win multiplier (more details below).

With 3 bonus features, reaction wins and free spins with increasing multiplier are the key feature elements on offer in the Bonanza Megaways slot. Let’s dig a little deeper.

Whenever you land a winning combination, the Reaction feature is triggered and a reaction takes place. The successful symbols are blasted off the reels and new symbols drop into the vacated positions and replace them. A new payout consideration then follows with the new positions in place.

If a new winning combination is formed, a new reaction follows and the process is repeated. This can lead to wave after wave of winners being created from a single spin. These reaction wins can be even more lucrative when you land them during the free spins as you’ll discover below.

This main extra, the Free Spins feature, in Bonanza Megaways activated by landing scatter symbols that spell out the word GOLD. You’ll then go on to play 12 free spins. If you’re lucky enough to land any more scatters on the triggering spin, each one adds another 5 free spins to your haul. If you were to land 6 scatters for example, you’d begin with 22 free spins.

This is known as the Unlimited Win Multiplier feature. What makes this so potentially rewarding is that the multiplier does not reset following an unsuccessful spin or reaction. It can keep on rising throughout the free spins.

Hope to see trolleys of gold bars trundle onto the reels too as they can deliver retriggers with 5 or 10 more free spins being added to your current total. There’s no limit to the number of potential retriggers, nor the maximum size of the multiplier. Get on a roll here and some explosive action is possible.

Bonanza Megaways Summary – the game that put Megaways on the map

To put it mildly, few games have had such a game-changing impact as the Bonanza Megaways slot. This mining spectacular has spawned a whole industry of slots that use Big Time Gaming’s innovative shape-shifting mechanic.

Despite all the imitators, Bonanza Megaways remains the most popular Megaways game, and by some distance too. The atmospheric design combined with the exciting gameplay make for a cracking combination.

With 12,000 x bet wins available on each spin or free spin, Bonanza Megaways has become one of the most popular slots in the world of online casinos. It’s the Megaways equivalent of Book of Ra Deluxe in the special expanding symbols/free spins genre.

Where to Play Bonanza Megaways Slot

Here are our top 3 casinos where you can play Bonanza Megaways!

What is the Bonanza Megaways RTP?

The Bonanza Megaways RTP rate is 96%. That figure is about average. On average, for every $100 wagered, $96 is paid out. The variance here is slightly above medium (3/5).

What is the Bonanza Megaways max win?

The most you can win from a single spin in Bonanza Megaways is an impressive 12,000 x your total bet. To win big, you need to increase the unlimited win multiplier during the free spins.

Are there any Bonanza Megaways free spins?

Yes, the Free Spins feature is played by spelling out the word GOLD. You’ll begin with at least 12 free spins and a 1x multiplier. Each reaction win increases the multiplier by 1 with no limits. You can also win unlimited extra free spins.

Is there a Bonanza Megaways free demo version?

Yes, you can try out the Bonanza Megaways free play version here at USCasinos.com. It’s available to play on your desktop, tablet or cell phone device too.

Filip
August 5, 2021
More details
Details
Written by: Filip
Originally published: August 5, 2021
Author
Overall, my eye for detail has helped me take this passion to the next level, and I am dedicated to delivering transparent and unbiased reviews. If I’m not writing, you can find me binging my favorite mystery shows, or playing with my cat.